This week I am excited for Super Adjacent by Crystal Cestari and We Were Promised Spotlight by Lindsay Sproul! 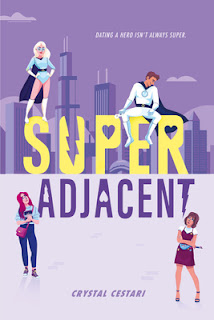 Super Adjacent looks like a fun new take on superheroes! In this world, superheroes are kinda like famous athletes, with people collecting character cards and having different heroes as idols. Main character Claire is one of the fans of superheroes. And she happens to have a crush on the newest hero, Joy. On the other hand is Bridgette, who has been dating a superhero and wants out. I'm excited to see the non-super women who support the heroes. I'm also excited for the f/f romance!

Claire has always wanted to work with superheroes, from collecting Warrior Nation cards as a kid to drafting "What to Say to a Hero" speeches in her diary. Now that she's landed a coveted internship with the Chicago branch of Warrior Nation, Claire is ready to prove she belongs, super or not. But complicating plans is the newest WarNat hero, Girl Power (aka Joy), who happens to be egotistical and self-important . . . and pretty adorable.

Bridgette, meanwhile, wants out of WarNat. After years of dating the famous Vaporizer (aka Matt), she's sick of playing second, or third, or five-hundredth fiddle to all the people-in-peril in the city of Chicago. Of course, once Bridgette meets Claire-who's clearly in need of a mentor and wingman-giving up WarNat becomes slightly more complicated. It becomes a lot more complicated when Joy, Matt, and the rest of the heroes go missing, leaving only Claire and Bridgette to save the day. 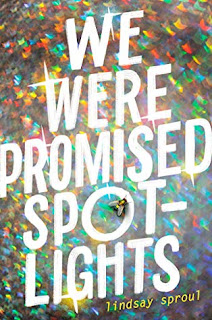 We Were Promised Spotlights is Lindsay Sproul's debut novel! The main character Taylor is the most popular girl at school, and seems like she has it all. She has everything, except the girl she likes, her best friend Susan. But her popularity does not go well with liking girls. I'm super excited for all the f/f books coming out this year! From contemporary like this to superhero books like Super Adjacent, there's a great diversity of f/f books! I just want all of them in my hands right now!

Taylor Garland's good looks have earned her the admiration of everyone in her small town. She's homecoming queen, the life of every party, and she's on every boy's most-wanted list.

People think Taylor is living the dream, and assume she'll stay in town and have kids with the homecoming king--maybe even be a dental hygienist if she's super ambitious. But Taylor is actually desperate to leave home, and she hates the smell of dentists' offices. Also? She's completely in love with her best friend, Susan.

Senior year is almost over, and everything seems perfect. Now Taylor just has to figure out how to throw it all away.

Lindsay Sproul's debut is full of compelling introspection and painfully honest commentary on what it's like to be harnessed to a destiny you never wanted.