Welcome to a new feature on the blog! With the ongoing pandemic, I've been thinking about ways to help new books and authors. Many aren't getting the release they expected, from canceled tours to not seeing their book in stores until months after release. This feature will include new releases that I'm personally excited for and books I've seen others mention as excited to read! I will try to be consistent and post on the same day each week, but don't be surprised if I switch around due to the wackiness of life.
Ever Cursed by Corey Ann Haydu 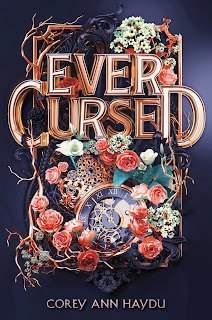 Damsel meets A Heart in a Body in the World in this incisive and lyrical feminist fairy tale about a princess determined to save her sisters from a curse, even if it means allying herself with the very witch who cast it.
The Princesses of Ever are beloved by the kingdom and their father, the King. They are cherished, admired.
Cursed.
Jane, Alice, Nora, Grace, and Eden carry the burden of being punished for a crime they did not commit, or even know about. They are each cursed to be Without one essential thing—the ability to eat, sleep, love, remember, or hope. And their mother, the Queen, is imprisoned, frozen in time in an unbreakable glass box.
But when Eden’s curse sets in on her thirteenth birthday, the princesses are given the opportunity to break the curse, preventing it from becoming a True Spell and dooming the princesses for life. To do this, they must confront the one who cast the spell—Reagan, a young witch who might not be the villain they thought—as well as the wickedness plaguing their own kingdom…and family.
Told through the eyes of Reagan and Jane—the witch and the bewitched—this insightful twist of a fairy tale explores power in a patriarchal kingdom not unlike our own.
Places to Purchase:
Indiebound
Barnes & Noble
Amazon
The Girl in the White Van by April Henry 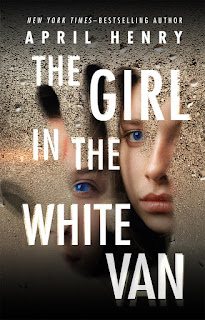 A teen is snatched after her kung fu class and must figure out how to escape—and rescue another kidnapped prisoner—in this chilling YA mystery.
When Savannah disappears soon after arguing with her mom’s boyfriend, everyone assumes she's run away. The truth is much worse. She’s been kidnapped by a man in a white van who locks her in an old trailer home, far from prying eyes. And worse yet, Savannah’s not alone: Ten months earlier, Jenny met the same fate and nearly died trying to escape. Now as the two girls wonder if he will hold them captive forever or kill them, they must join forces to break out—even if it means they die trying.
Master mystery-writer April Henry weaves another heart-stopping young adult thriller in this story ripped straight from the headlines.
Places to Purchase:
Indiebound
Barnes & Noble
Amazon
The Friend Scheme by Cale Dietrich 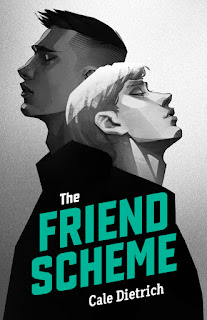 Part thriller, part romance, The Friend Scheme is another twisty #ownvoices YA novel from Cale Dietrich, author of The Love Interest.
High schooler Matt's father is rich, powerful, and seemingly untouchable-- a mobster with high hopes that his son will follow in his footsteps. Matt's older brother Lukas seems poised to do just that, with a bevy of hot girls in tow. But Matt has other ambitions--and attractions.
And attraction sometimes doesn't allow for good judgement. Matt wouldn't have guessed that Jason, the son of the city's police commisioner, is also carrying a secret. The boys' connection turns romantic, a first for both. Now Matt must decide if he can ever do the impossible and come clean about who he really is, and who he is meant to love.
Places to Purchase:
Indiebound
Barnes & Noble
Amazon
I Kissed Alice by Anna Birch 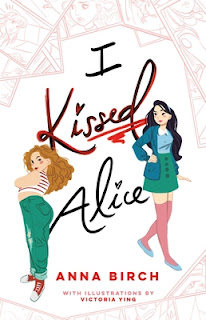 For fans of Simon vs. The Homo Sapiens Agenda and Fangirl, I Kissed Alice is a romantic comedy about enemies, lovers, and everything in between.
Rhodes and Iliana couldn't be more different, but that's not why they hate each other.
Hyper-gifted artist Rhodes has always excelled at Alabama’s Conservatory of the Arts despite a secret bout of creator's block, while transfer student Iliana tries to outshine everyone with her intense, competitive work ethic. Since only one of them can get the coveted Capstone scholarship, the competition between them is fierce.
They both escape the pressure on a fanfic site where they are unknowingly collaborating on a graphic novel. And despite being worst enemies in real life, their anonymous online identities I-Kissed-Alice and Curious-in-Cheshire are starting to like each other...a lot. When the truth comes out, will they destroy each other's future?
Places to Purchase:
Indiebound
Barnes & Noble
Amazon
Today Tonight Tomorrow by Rachel Lynn Solomon 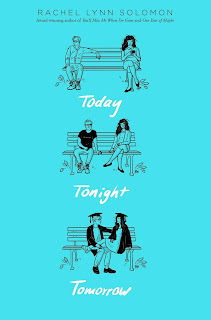 The Hating Game meets Nick and Norah’s Infinite Playlist by way of Morgan Matson in this unforgettable romantic comedy about two rival overachievers whose relationship completely transforms over the course of twenty-four hours.
Today, she hates him.
It’s the last day of senior year. Rowan Roth and Neil McNair have been bitter rivals for all of high school, clashing on test scores, student council elections, and even gym class pull-up contests. While Rowan, who secretly wants to write romance novels, is anxious about the future, she’d love to beat her infuriating nemesis one last time.
Tonight, she puts up with him.
When Neil is named valedictorian, Rowan has only one chance at victory: Howl, a senior class game that takes them all over Seattle, a farewell tour of the city she loves. But after learning a group of seniors is out to get them, she and Neil reluctantly decide to team up until they’re the last players left—and then they’ll destroy each other.
As Rowan spends more time with Neil, she realizes he’s much more than the awkward linguistics nerd she’s sparred with for the past four years. And, perhaps, this boy she claims to despise might actually be the boy of her dreams.
Tomorrow…maybe she’s already fallen for him.
Places to Purchase:
Indiebound
Barnes & Noble
Amazon
This is My America by Kim Johnson 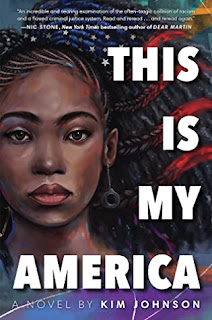 Dear Martin meets Just Mercy in this unflinching yet uplifting YA novel that explores the racist injustices in the American justice system.
Every week, seventeen-year-old Tracy Beaumont writes letters to Innocence X, asking the organization to help her father, an innocent Black man on death row. After seven years, Tracy is running out of time--her dad has only 267 days left. Then the unthinkable happens. The police arrive in the night, and Tracy's older brother, Jamal, goes from being a bright, promising track star to a "thug" on the run, accused of killing a white girl. Determined to save her brother, Tracy investigates what really happened between Jamal and Angela down at the Pike. But will Tracy and her family survive the uncovering of the skeletons of their Texas town's racist history that still haunt the present?
Fans of Nic Stone, Tiffany D. Jackson, and Jason Reynolds won't want to miss this provocative and gripping debut.
Places to Purchase:
Indiebound
Barnes & Noble
Amazon
A Wicked Magic by Sasha Laurens 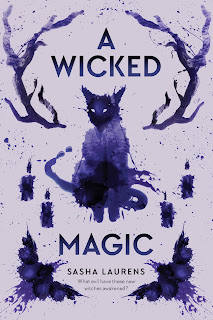 The Chilling Adventures of Sabrina meets The Craft when modern witches must save teens stolen by an ancient demon in this YA fantasy-thriller debut.
Dan and Liss are witches. The Black Book granted them that power. Harnessing that power feels good, especially when everything in their lives makes them feel powerless.
During a spell gone wrong, Liss's boyfriend is snatched away by an evil entity and presumed dead. Dan and Liss's friendship dies that night, too. How can they practice magic after the darkness that they conjured?
Months later, Liss discovers that her boyfriend is alive, trapped underground in the grips of an ancient force. She must save him, and she needs Dan and the power of The Black Book to do so. Dan is quickly sucked back into Liss's orbit and pushes away her best friend, Alexa. But Alexa has some big secrets she's hiding and her own unique magical disaster to deal with.
When another teenager disappears, the girls know it's no coincidence. What greedy magic have they awakened? And what does it want with these teens it has stolen?
Set in the atmospheric wilds of California's northern coast, Sasha Laurens's thrilling debut novel is about the complications of friendship, how to take back power, and how to embrace the darkness that lives within us all.
Places to Purchase:
Indiebound
Barnes & Noble
Amazon
The Care and Feeding of Waspish Widows by Olivia Waite 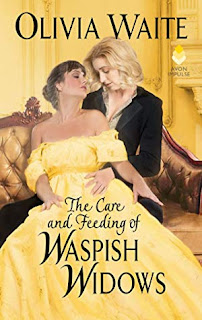 Check out my review!
When Agatha Griffin finds a colony of bees in her warehouse, it’s the not-so-perfect ending to a not-so-perfect week. Busy trying to keep her printing business afloat amidst rising taxes and the suppression of radical printers like her son, the last thing the widow wants is to be the victim of a thousand bees. But when a beautiful beekeeper arrives to take care of the pests, Agatha may be in danger of being stung by something far more dangerous…
Penelope Flood exists between two worlds in her small seaside town, the society of rich landowners and the tradesfolk. Soon, tensions boil over when the formerly exiled Queen arrives on England’s shores—and when Penelope’s long-absent husband returns to Melliton, she once again finds herself torn, between her burgeoning love for Agatha and her loyalty to the man who once gave her refuge.
As Penelope finally discovers her true place, Agatha must learn to accept the changing world in front of her. But will these longing hearts settle for a safe but stale existence or will they learn to fight for the future they most desire?
Places to Purchase:
Indiebound
Barnes & Noble
Amazon
Would I Lie to the Duke by Eva Leigh 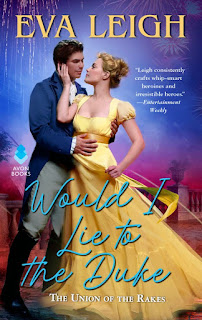 Check out my review!
When an ambitious entrepreneur pretends to be a lady of means, she catches the eye—and heart—of a duke...
Jessica McGale's family business desperately needs investors, and she's determined to succeed at any cost. But she knows London's elite will never look twice at a humble farm girl like herself. Posing as “Lady Whitfield,” however, places her in the orbit of wealthy, powerful people—most notably the Duke of Rotherby. His influence and support could save her company, but Jess never expected the effect he'd have on her.
Society thinks Noel is a notorious, carefree duke who dabbles in investments, but there's a side to him that only his closest friends see. When he crosses paths with Lady Whitfield at a business bazaar, his world tilts on its axis. She's brilliant and compelling, and brings him to his knees like no woman has before. Trust is difficult for Noel, but Jess makes him believe anything is possible...
As time ticks down on her Cinderella scheme, the thought of achieving her goal at Noel's expense breaks Jess' heart. He doesn't just want her now, he wants her forever. But will her secret end their future before it begins?
Places to Purchase:
Indiebound
Barnes & Noble
Amazon
I hope you enjoyed the first iteration of this post! Are you excited for any of this week's releases? And if you have any thoughts of suggestions about the feature, please leave them in the comments!
Posted by Isabel C at 7/29/2020 09:57:00 PM