It's Quarantine Releases time again! Now on a new day! Wednesday/Thursday wasn't quite working for me, and I want to try posting these the day before the books release instead of the day after. Let me know in the comments what you think of the change!
When Villains Rise by Rebecca Schaeffer 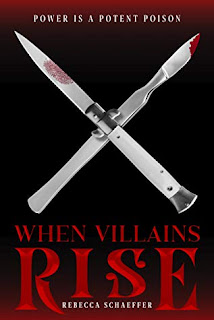 Dexter meets Victoria Schwab in this dark and compelling fantasy about a girl who is determined to take down the black market once and for all in the conclusion to the trilogy that started with the critically acclaimed Not Even Bones.
Nita finally has Fabricio, the boy who betrayed her to the black market, within her grasp. But when proof that Kovit’s a zannie—a monster who eats pain in order to survive—is leaked to the world, Nita must reevalute her plans.
With enemies closing in on all sides, the only way out is for Nita and Kovit to take on the most dangerous man in the world: Fabricio’s father. He protects the secrets of the monsters who run the black market. Stealing those secrets could be the one thing that stands between Nita and Kovit and certain death in the thrilling conclusion to the trilogy that began with the critically acclaimed Not Even Bones.
Places to Purchase:
Indiebound
Barnes & Noble
Amazon
Sources Say by Lori Goldstein 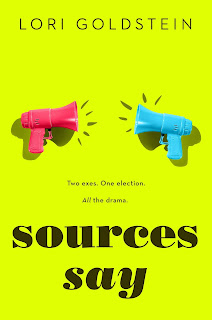 Two exes. One election. All the drama.
For fans of Becky Albertalli and Morgan Matson comes a funny, hearfelt novel about fueding exes running for class president and the scandal that makes the previously boring school election the newest trending hashtag.
At Acedia High School outside of Boston, student council has always been nothing more than a popularity contest. Nobody pays attention. Nobody cares.
But all that changes when the Frankengirls show up. During the very first week of school, someone plasters the halls with Photoshopped images of three "perfect tens"--images of scantily clad girls made from real photos of girls at school. The student body is livid. And the two presidential candidates, Angeline Quinn and Leo Torres, jump on the opportunity to propose their solutions and secure votes. After their messy break up, Leo and Angie are fighting tooth and nail to win this thing and their constituents are mesmerized as they duke it out.
As if things couldn't be more dramatic, the school's two newspapers get involved. The Red & Blue is run by Angie's sister Cat and she prides herself on only reporting the facts. But her morals are tested when The Shrieking Violet--written by an anonymous source and based less on facts and more on fiction--blatantly endorses Leo. Rumors fly, secrets are leaked, and the previously mundane student election becomes anything but boring.
Places to Purchase:
Indiebound
Barnes & Noble
Amazon
The Summer of Everything by Julian Winters 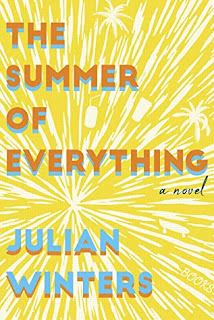 Comic book geek Wesley Hudson excels at two things: slacking off at his job and pining after his best friend, Nico. Advice from his friends, ‘90s alt-rock songs, and online dating articles aren't helping much with his secret crush. And his dream job at Once Upon a Page, the local used bookstore, is threatened when a coffeeshop franchise wants to buy the property. To top it off, his annoying brother needs wedding planning advice. When all three problems converge, Wes comes face-to-face with the one thing he’s been avoiding—adulthood.
Now, confronted with reality, can Wes balance saving the bookstore and his strained sibling relationship? Can he win the heart of his crush, too?
Places to Purchase:
Indiebound
Barnes & Noble
Amazon
The Other Side of the Sky by Amie Kaufman and Meagan Spooner 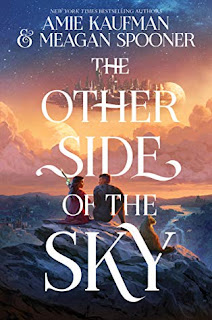 Prince North’s home is in the sky, in a gleaming city held aloft by intricate engines powered by technology. Nimh is the living goddess of her people on the surface, responsible for providing answers, direction—hope.
Linked by a terrifying prophecy and caught between duty and fate, they must choose between saving their people or succumbing to the bond that is forbidden between them.
Magnetic and gorgeously thematic, New York Times bestselling author duo Amie Kaufman and Meagan Spooner have crafted a gripping tale of magic and logic, fate and choice, and an impossible decision between an empty future and a deadly love. Perfect for fans of Claudia Gray and Laini Taylor.
Places to Purchase:
Indiebound
Barnes & Noble
Amazon
Nobody Knows But You by Anica Mrose Rissi 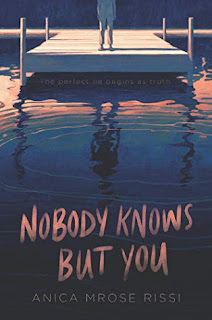 Maybe a killer only looks like a killer in the moment just before, during, or after.
Maybe a liar, a good one, never shows it.
Kayla is still holding on to Lainie’s secrets.
After all, Lainie is Kayla’s best friend. And despite Lainie’s painful obsession with her on-again, off-again boyfriend, and the ways he has tried to come between them, friends don’t spill each other’s secrets. They don’t betray each other’s trust.
The murder at the end of the summer doesn’t change all that.
Besides—Kayla knows that the truth is not the whole story.
Places to Purchase:
Indiebound
Barnes & Noble
Amazon
These Vengeful Hearts by Katherine Laurin 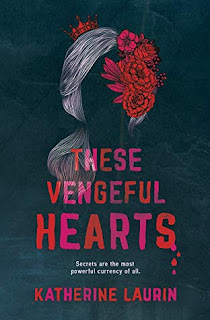 Anyone can ask the Red Court for a favor...but every request comes at a cost. And once the deed is done, you're forever in their debt.
Whenever something scandalous happens at Heller High, the Red Court is the name on everyone's lips. Its members--the most elite female students in the school--deal out social ruin and favors in equal measure, their true identities a secret known only to their ruthless leader: the Queen of Hearts.
Sixteen-year-old Ember Williams has seen firsthand the damage the Red Court can do. Two years ago, they caused the accident that left her older sister paralyzed. Now, Ember is determined to hold them accountable...by taking the Red Court down from the inside.
But crossing enemy lines will mean crossing moral boundaries, too--ones Ember may never be able to come back from. She always knew taking on the Red Court would come at a price, but will the cost of revenge be more than she's willing to sacrifice?
Places to Purchase:
Indiebound
Barnes & Noble
Amazon
Iron Heart by Nina Varela 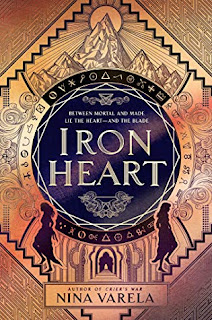 Critically acclaimed author Nina Varela delivers a stunning sequel to the richly imagined queer epic fantasy Crier’s War, which SLJ called “perfect for fans of Sarah J. Maas’s Throne of Glass.”
For too long, Automae have lorded over the kingdom of Rabu, oppressing its human citizens. But the human revolution has risen, and at its heart is Ayla. Once a handmaiden, now a fugitive, Ayla narrowly escaped the palace of Lady Crier, the girl she would’ve killed if she hadn’t fallen in love first.
Now Ayla has pledged her allegiance to Queen Junn, who can help accomplish the human rebellion’s ultimate goal: destroy the Iron Heart. Without its power, the Automae will be weakened to the point of extinction. Ayla wants to succeed, but can’t shake the strong feelings she’s developed for Crier. And unbeknownst to her, Crier has also fled the palace, taking up among traveling rebels, determined to find and protect Ayla.
Even as their paths collide, nothing can prepare them for the dark secret underlying the Iron Heart.
Places to Purchase:
Indiebound
Barnes & Noble
Amazon
Night Shine by Tessa Gratton 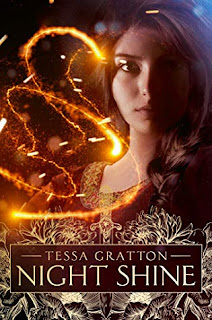 An orphan girl must face untold danger and an ancient evil to save her kingdom’s prince in this lush, romantic fantasy perfect for fans of Girls of Paper and Fire and Tess of the Road.
How can you live without your heart?
In the vast palace of the empress lives an orphan girl called Nothing. She slips within the shadows of the Court, unseen except by the Great Demon of the palace and her true friend, Prince Kirin, heir to the throne. When Kirin is kidnapped, only Nothing and the prince’s bodyguard suspect that Kirin may have been taken by the Sorceress Who Eats Girls, a powerful woman who has plagued the land for decades. The sorceress has never bothered with boys before, but Nothing has uncovered many secrets in her sixteen years in the palace, including a few about the prince.
As the empress’s army searches fruitlessly, Nothing and the bodyguard set out on a rescue mission, through demon-filled rain forests and past crossroads guarded by spirits. Their journey takes them to the gates of the Fifth Mountain, where the sorceress wields her power. There, Nothing will discover that all magic is a bargain, and she may be more powerful than she ever imagined. But the price the Sorceress demands for Kirin may very well cost Nothing her heart.
Places to Purchase:
Indiebound
Barnes & Noble
Amazon
Meme by Aaron Starmer 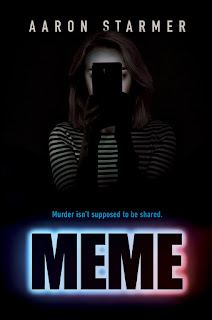 For fans of One of Us Is Lying, a tense, psychological thriller for the internet age about the destructive combination of self-important goals and self-serving plans.
No one is going to miss Cole Weston. A loner without friends or family and an unhealthy obsession with the darker corners of the internet, Cole had become increasingly violent toward his ex-girlfriend, and threated to do so much worse. So it was only logical–only right, really–that his former friends took it upon themselves to rid the world of Cole Weston.
Now, Logan, Meeka, Holly, and Grayson are forever bound by Cole’s body, buried under the cold Vermont earth. The failsafe should any one of them consider betrayal: their old phones, buried with Cole, disconnected from service, and each wiped clean except for one file–their video confession.
As expected, no one misses Cole. Or even realizes he’s gone. But a few days later, the meme appears. It’s a stupid meme, old school and not even funny. But every terrible joke has one thing in common, the same photo–a screenshot from the confession video still entombed six feet under with Cole.
Places to Purchase:
Indiebound
Barnes & Noble
Amazon
There are so many amazing books coming out this week, and all September! I got a chance to read Night Shine early, and can confirm that it is amazing! I am absolutely dying to read Iron Heart, and will be going to the bookstore as soon as I know my copy is in. The Other Side of the Sky is grabbing me, and Sources Say seems perfect for election season! Let me know in the comments what books you're excited for this week!
Posted by Isabel C at 9/07/2020 12:00:00 AM