As you might have noticed, this post is going up late. This week has been a lot for me. I had foot surgery on Wednesday, and spent the days leading up super anxious. I will be backdating this to Monday for my own sanity though. And please forgive any typos, as I will be on painkillers for quite a while.
Onto the fun! I've got four featured releases today, and I hope you take the chance to check them out!
Warmaidens by Kelly Coon 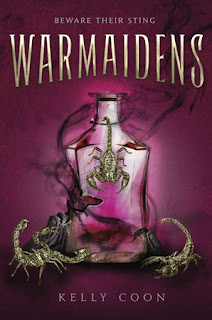 Warmaidens is the action-packed conclusion to the heartwrenching Gravemaidens fantasy duology. Kammani and the maidens are now going to war against the ruler who tried to entomb them.
Just a few moons after escaping the tomb in Alu, Kammani and the other runaway maidens have found refuge in the city-state of Manzazu. There, Kammani has become a respected healer, especially among the warriors she's brought back from the brink of death. Now that the nightmares of Alu are fading, she can finally decide whether or not to take Dagan's hand in marriage.
But when an assassin murders a healer he believes is Kammani and attempts to kill the displaced queen of Alu, the maidens realize they've been found.
Hungry for revenge, Manzazu's queen wants to strike back at Alu with her fiercest weapons--her scorpion warrior maidens--but Kammani knows that war harms more than it heals. To save the innocents and any chance of a future with Dagan, Kammani must take down Alu's ruler before their lives burn up in the flames of war.
Places to Purchase:
Indiebound
Barnes & Noble
Amazon
Coming Up for Air by Nicole Tyndall 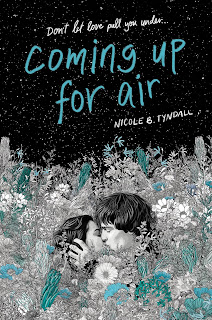 For fans of Nina LaCour and The Spectacular Now, a powerful coming-of-age story about a girl with creative aspirations and the boy who charms his way into her life, centering on themes of addiction, loss, and the tumultuousness of first love—and how to find strength when everything falls apart.
Ever since her mom’s cancer scare, Hadley hasn’t been one for taking risks. And after seeing her sister go through one too many heartbreaks, she definitely has no interest in dating. Hadley just wants to keep her head down and enjoy the rest of high school with her friends, focusing on her photography and getting into the art school of her dreams.
Then enters Braden, star of the swim team and precisely the kind of person Hadley avoids, all bravado and charm and impulsivity. From their first moment together, they are perfect sparring partners, equally matched. And it’s intoxicating. Braden sees her, really sees her, and Hadley decides it might be time to break all her rules.
Braden shows Hadley how to live again, and soon Hadley is happier than she’ll ever admit out loud. But that’s before her family is faced with devastating news, and Braden starts hiding a growing, dark secret. As it threatens to shatter everything they’ve built, Hadley must confront her own actions and determine if she has the strength to walk away.
Places to Purchase:
Indiebound
Barnes & Noble
Amazon
This is How We Fly by Anna Meriano 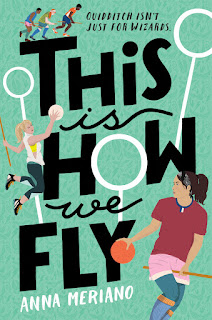 17-year-old vegan feminist Ellen Lopez-Rourke has one muggy Houston summer left before college. She plans to spend every last moment with her two best friends before they go off to the opposite ends of Texas for school. But when Ellen is grounded for the entire summer by her (sometimes) evil stepmother, all her plans are thrown out the window.
Determined to do something with her time, Ellen (with the help of BFF Melissa) convinces her parents to let her join the local muggle Quidditch team. An all-gender, full-contact game, Quidditch isn't quite what Ellen expects. There's no flying, no magic, just a bunch of scrappy players holding PVC pipe between their legs and throwing dodgeballs. Suddenly Ellen is thrown into the very different world of sports: her life is all practices, training, and running with a group of Harry Potter fans.
Even as Melissa pulls away to pursue new relationships and their other BFF Xiumiao seems more interested in moving on from high school (and from Ellen), Ellen is steadily finding a place among her teammates. Maybe Quidditch is where she belongs.
But with her home life and friend troubles quickly spinning out of control--Ellen must fight for the future that she wants, now she's playing for keeps.
Filled with heart and humor, Anna Meriano's YA debut is perfect for fans of Dumplin' and Hot Dog Girl.
Places to Purchase:
Indiebound
Barnes & Noble
Amazon
For Better or Cursed by Kate Williams 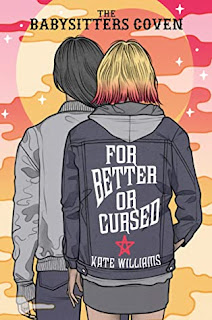 Adventures in Babysitting meets Buffy the Vampire Slayer in this funny, action-packed sequel about a coven of witchy babysitters who realize their calling to protect the innocent and save the world from an onslaught of evil.
Esme Pearl's life used to be all about bumming rides and babysitting. Sure, it wasn't glamorous, but it was predictable. All that changed when Cassandra Heaven came to town, and they discovered their complicated, and connected, legacy: Esme and Cassandra are Sitters, supernaturally-gifted teens armed with an ever-changing grimoire of Sitter witchcraft to help them protect the innocent and keep evil demons at bay. You know, the typical teenage stuff.
But just as Esme is starting to adjust to--and maybe even like--her new normal, life lobs another glitter bomb her way. The Synod--the Sitterhood's governing circle--has called a Summit, a once-in-a-generation gathering that promises training, education, and whole lot of ice-breakers.
Esme should be excited--a Summit might mean she can finally get the answers she desperately wants--but she can't shake a building sense of panic. Especially since Cassandra's not acting like herself; Esme's dad is MIA; Pig is out of dog food; Janis is scared to be alone; and there's a guy who seems too good to be true, again. Worst of all, it soon becomes clear, there's no one watching the kids. It's obvious the Summit is a haute mess, but will it be a deadly one, too?
Places to Purchase:
Indiebound
Barnes & Noble
Amazon
So many amazing books to choose from. If you're a Harry Potter fan looking to escape the terfy-ness of the author, This is How We Fly is for you! Warmaidens and For Better or Cursed are both sequels to some amazing fantasies from last year. And Coming Up for Air is a complex contemporary. And just so you know, there won't be a Quarantine Releases next week, as I don't know of any books coming out. Let me know in the comments if any of these books catch your eye!
Posted by Isabel C at 12/14/2020 12:00:00 AM