I am thrilled to be hosting a spot on the LIKE OTHER GIRLS by Britta Lundin Blog Tour hosted by Rockstar Book Tours. Check out my post and make sure to enter the giveaway! I love supporting books featuring women in sports, especially when they're breaking boundaries, so Like Other Girls is right up my alley! 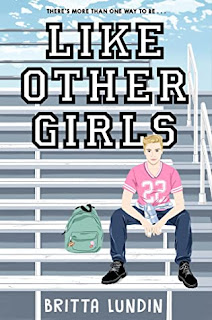 Title: Like Other Girls
Author: Britta Lundin
Release: August 3, 2021
Publisher: Disney-Hyperion
Formats: Hardcover, eBook, Audiobook
Pages: 384
Review: 5 Stars
Synopsis:
"What if I played football?" I ask. As soon as it's out of my mouth, I feel stupid. Even suggesting it feels like I've overstepped some kind of invisible line we've all agreed not to discuss. We don't talk about how Mara is different from other girls. We don't talk about how Mara is gay but no one says so. But when I do stuff like this, I worry it gets harder for us all to ignore what's right in front of us. I direct my gaze to Quinn. "What do you think?"

"I think it's frickin' genius," he says.

After getting kicked off the basketball team for a fight that was absolutely totally not her fault (okay maybe a little her fault), Mara is dying to find a new sport to play to prove to her coach that she can be a team player. A lifelong football fan, Mara decides to hit the gridiron with her brother, Noah, and best friend, Quinn-and she turns out to be a natural. But joining the team sets off a chain of events in her small Oregon town-and within her family-that she never could have predicted.

Inspired by what they see as Mara's political statement, four other girls join the team. Now Mara's lumped in as one of the girls-one of the girls who can't throw, can't kick, and doesn't know a fullback from a linebacker. Complicating matters is the fact that Valentina, Mara's crush, is one of the new players, as is Carly, Mara's nemesis-the girl Mara fought with when she was kicked off the basketball team. What results is a coming-of-age story that is at once tear-jerking and funny, thought-provoking and real, as Mara's preconceived notions about gender, sports, sexuality, and friendship are turned upside down.

Britta Lundin's sophomore novel will give readers all the feels, and make them stand up and cheer.

You Can Find it At:
Goodreads
Amazon
Kindle
B&N
iBooks
Kobo
TBD
Bookshop.org

First Impressions
I was super excited to read this book, and so I was ecstatic when I got an ARC through work. I read it a little slower than usual because I was in the middle of an archaeological field school, but I spent every extra minute I could reading! I love reading stories about young women who break the mold, and Mara definitely fits that bill!
Characters
It's clear at the beginning of the book that Mara has a lot of character growth to do. She doesn't like to rock the boat, and is likely to agree with some of the misogynistic stuff her guy friends say, even if they make her uncomfortable. She liked being seen as 'one of the guys' and not like those *other* girls, before eventually realizing that might not be a healthy way to go about friendships. Luckily, she meets Jupiter (a queer woman) who serves as a mentor. Jupiter is a great character, and I would definitely love to have a woman like her in my life!
Mara goes through a lot of tough situations, especially as her small town isn't very accepting, both of girls playing male-dominated sports and of queer people. Mara knows she's lesbian from the beginning, but worries about coming out. She's both not sure how her parents will react, her mother already struggles with letting Mara wear jeans and t-shirts instead of dresses, and she knows many neighbors won't react kindly. But as Mara gets to know the four other girls who join the football team, she shows amazing growth and realizes that her world is wider than she originally thought. Over the course of the book, she figures out that even in an unforgiving environment, you can build your own family around you.
World Building
Officially, I believe the book takes place in rural Oregon. That said, the book could easily be taking place basically anywhere rural and with prominent farming culture. I think Lundin does a great job of setting the scene. We really get the sense that there's a lot of wide open spaces, that people are close knit even if they're physically far apart, and that change comes hard. As someone who lives in suburbia, I really felt like I was transported to another place.
Final Thoughts

I highly recommend reading Like Other Girls! If you like sports-centric YA books, this is a must-read. Even if football isn't your thing, Mara is a compelling character. You can't help routing for her, even if she's making questionable decisions. Watching her grow and come into her own was a pleasure. The book has some great queer rep and I can't wait to read more from the author! 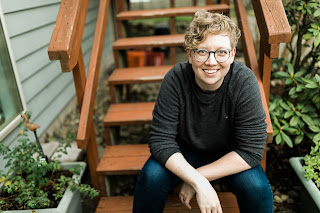 Britta Lundin is a TV writer and author.

She’s written for shows such as Riverdale, Betty, and The Big Leap and is the author of the young adult novels Like Other Girls (out August 2021) and Ship It.

Originally from the Pacific Northwest, she lives with her wife, kid, and dog in Los Angeles.

3 winners will receive a finished copy of LIKE OTHER GIRLS, US Only.