It's Day Three of the Historical Romance bracket challenge! We're chugging along nicely, and I'm excited to see just how many of you are participating! We've got some great books going head-to-head tonight, and I can't wait to see who comes out on top!
Current Standings:
Each group had a runaway winner today. In Group 2, Beauty Tempts the Beast by Lorraine Heath triumphed over Claiming the Highlander's Heart by Lily Maxton. An Unconditional Freedom by Alyssa Cole beat Girls Before Earls by Anna Bennett in Group 10. Governess Gone Rogue by Laura Lee Guhrke faced off and won Group 18 against The Earl and the Reluctant Lady by Robyn DeHart. Group 26 spent a good while neck and neck, but A Good Duke Is Hard to find by Christina Britton pulled away as the winner over The Infamous Duchess by Sophie Barnes.
Tonight's Books:
Group 3 - My Darling, My Disaster by Amalie Howard and Angie Morgan vs After Dark With the Duke by Julie Anne Long (March 20th, 8pm)
Group 11 - A Lady's Guide to Mischief and Mayhem by Manda Collins vs Her Night With the Duke by Diana Quincy (March 20th, 8pm)
Group 19 - Duke Gone Rogue by Christy Carlyle vs The Lady's Guide to Celestial Mechanics by Olivia Waite (March 20th, 8pm)
Group 27 - Third Son's a Charm by Shana Galen vs The Duke's Guide to Correct Behavior by Megan Frampton (March 20th, 8pm) 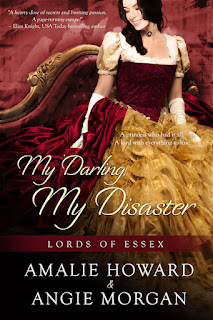 Title: My Darling, My Disaster
Author: Amalie Howard, Angie Morgan
Publisher: Entangled
Release: March 27, 2017
Series: Lord of Essex #2
Pages: 452
My Review: 5 Stars
Synopsis:
A princess who had it all. A lord with everything to lose.
Lord Graham Findlay, the shamelessly virile Viscount Northridge, has a disgraceful secret, one he’ll do anything to hide. Holding his passions at bay, Gray has sworn off the fairer sex. But when temptation comes in the form of an intriguing woman he cannot easily avoid, Gray’s integrity—and his most depraved desires—are put to the ultimate test.
Self-assured and carefree Princess Svetlanka Volkonsky never dreamed she would one day become a lady’s maid to avoid a dangerous traitor. But danger also comes in many guises, especially in the sinful and devastatingly attractive lord of the manor who introduces her to a world of singular pleasure.
When Lana’s past emerges to threaten the life and the false identity she’s built in England, she and Gray find themselves falling into a tangled web of lies and intrigue...and the last place either of them expected to fall...in love.
You Can Find it At:
Barnes & Noble
Apple Books
Kobo
Amazon 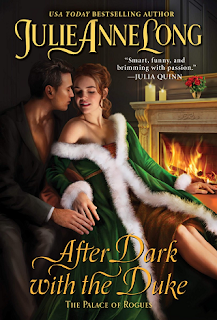 Title: After Dark With the Duke
Author: Julie Anne Long
Publisher: Avon
Release: November 30, 2021
Series: The Palace of Rogues #4
Pages: 384
Synopsis:
He’s the battle-hardened son of a bastard, raised in the wilds of New York. She’s the sheltered, blue-blooded darling of the London broadsheets, destined to marry a duke. Their worlds could only collide in a boardinghouse by the London docks...and when they do, the sparks would ignite all of England.
Nothing can stop Hugh Cassidy’s drive to build an American empire...unless it’s his new nemesis, the arrogant, beautiful, too-clever-by-half Lady Lillias Vaughn. The fascination is mutual. The temptation is merciless. And the inevitable indiscretion? Soul-searing—and the ruination of them both. Hugh’s proposal salvages Lillias’s honor but kills their dreams for their futures...until they arrive at a plan that could honorably set them free.
But unraveling their entanglement inadvertently uncovers enthralling truths: about Lillias’s wounded, tender heart and fierce spirit. About Hugh’s stunning gentleness, depth, and courage. Soon Hugh knows that as surely as he’d fight a thousand battles to win her...the best way to love Lillias means breaking his own heart.
You Can Find it At:
Amazon
Barnes and Noble
Powell's Books
Books-A-Million
Apple Books
Indiebound
HarperCollins
Kobo 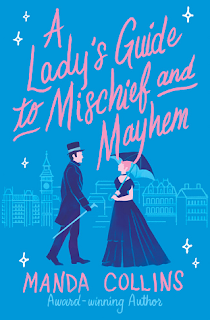 Title: A Lady's Guide to Mischief and Mayhem
Author: Manda Collins
Publisher: Forever
Release: November 10, 2020
Series: A Lady's Guide #1
Pages: 352
Synopsis:
Of all the crime scenes in the world, she walks into his. Twice.
​
England, 1865: Newspaper columnist Lady Katherine Bascomb finds herself the subject of speculation when her latest article leads to an arrest in the murders plaguing London. The English believe women ought not write about such vulgar things as crime, and a particularly attractive detective inspector is incensed that she’s interfered with his investigation. To escape her sudden notoriety, Katherine heads to the country—only to witness a murder upon her arrival.
​
Detective Inspector Andrew Eversham is appalled when Lady Katherine entangles herself in one of his cases—again. Her sensationalist reporting already nearly got him kicked off the police force, and he’ll be damned if he permits her to meddle a second time. Yet, her questions are awfully insightful, and he can’t deny his attraction to both her beauty and brains. As the clues point to a dangerous criminal, the two soon realize their best option is working together. But with their focus on the killer lurking in the shadows, neither is prepared for the other risk the case poses—to their hearts.
You Can Find it At:
Ripped Bodice
Amazon
Books-A-Million
iBooks
Barnes & Noble
Indiebound
Kobo 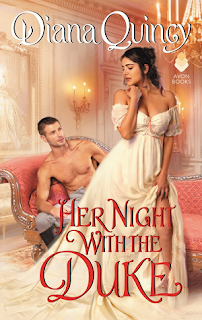 Title: Her Night With the Duke
Author: Diana Quincy
Publisher: Avon
Release: September 29, 2020
Series: Clandestine Affairs #1
Pages: 377
My Review: 5 Stars
Synopsis:
Desire knows no reason...
When Lady Delilah Chambers finds herself stranded at a country inn on a rain-swept evening, she’s forced to fend off a group of ruffians with the help of a handsome gentleman. Irresistibly drawn to each other, Leela and the stranger spend one reckless night in each others’ arms—and then go their separate ways. But the very next day Leela receives the shock of her life when she meets the duke who is set on wedding her beloved stepdaughter.
When it finds two destined hearts...
One night isn’t enough with a woman as fierce, fiery, and brilliant as Leela. Elliot Townsend, Duke of Huntington, cannot believe his good fortune when their chance encounter leads to an unforgettable evening of passion. Yet Hunt’s luck runs out when he is introduced to his prospective mother-in-law. Dowagers aren’t supposed to look like this...
Leela and Hunt are determined to keep each other at arm’s length, which should be easy enough for two intelligent adults with reputations to uphold. The problem is all logic is lost when it comes to a passion that refuses to be ignored.
You Can Find it At:
Indiebound
Barnes & Noble
Amazon
iBooks
Kobo 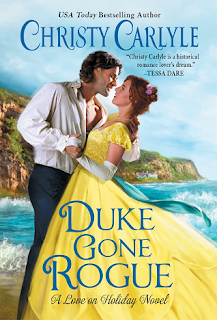 Title: Duke Gone Rogue
Author: Christy Carlyle
Publisher: Avon
Release: December 28, 2021
Series: Love on Holiday #1
Pages: 355
Synopsis:
Will Hart, the Duke of Ashmore, is everything his father was not: scrupulously honest, forbidding, and apparently joyless. As a duke, he’s a catch, but as a grumpy stick-in-the mud, no lady knows quite how to catch his eye. When his sisters concoct a plan for him to visit a run-down family property in Cornwall, he reluctantly agrees, hoping it will be a chance for him to rediscover the carefree man he once was.
Madeline Ravenwood believes she can do anything she puts her mind to, including running the gardening business she inherited from her father and being a founding member of the Royal Visit Committee. Hard at work preparing for Princess Beatrice’s visit to judge their annual flower show, the appearance of a stern, handsome duke is a distraction Maddie doesn’t need.
Tasked by the committee to convince the duke to repair his ramshackle manor house in time for the royal visit, he agrees, if she will join him as he explores Cornwall. Spending their days, and nights, together, Will’s love for Maddie becomes too strong to ignore. But Maddie knows how different their worlds are and when the burdens of his title reappear, can Will convince her that she’s the woman he’s been waiting for?
You Can Find it At:
Amazon
Barnes & Noble
Books-A-Million
Chapters Indigo
IndieBound
The Book Depository
Apple Books
Nook
Kobo
Google Play 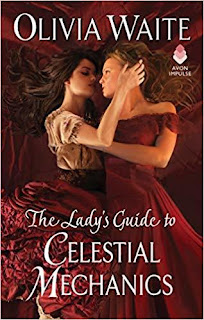 Title: The Lady's Guide to Celestial Mechanics
Author: Olivia Waite
Publisher: Avon Impulse
Release: June 25, 2019
Series: Feminine Pursuits #1
Pages: 322
My Review: 5 Stars
Synopsis:
As Lucy Muchelney watches her ex-lover’s sham of a wedding, she wishes herself anywhere else. It isn’t until she finds a letter from the Countess of Moth, looking for someone to translate a groundbreaking French astronomy text, that she knows where to go. Showing up at the Countess’ London home, she hoped to find a challenge, not a woman who takes her breath away.
Catherine St Day looks forward to a quiet widowhood once her late husband’s scientific legacy is fulfilled. She expected to hand off the translation and wash her hands of the project—instead, she is intrigued by the young woman who turns up at her door, begging to be allowed to do the work, and she agrees to let Lucy stay. But as Catherine finds herself longing for Lucy, everything she believes about herself and her life is tested.
While Lucy spends her days interpreting the complicated French text, she spends her nights falling in love with the alluring Catherine. But sabotage and old wounds threaten to sever the threads that bind them. Can Lucy and Catherine find the strength to stay together or are they doomed to be star-crossed lovers?
You Can Find it At:
Avon Impulse
The Ripped Bodice
Indiebound
Amazon
Barnes & Noble
Google
iBooks 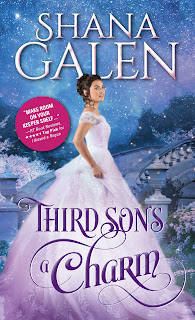 Title: Third Son's a Charm
Author: Shana Galen
Publisher: Sourcebooks Casablanca
Release: November 7, 2017
Series: The Survivors #1
Pages: 401
My Review: 5 Stars
Synopsis:
Ewan Mostyn thinks a job as a duke's daughter's bodyguard will be easy―but Lady Lorraine has a few tricks up her sleeve that spark an undeniable passion...
Fiercely loyal to his friends and comrades, Ewan Mostyn is the toughest in a group of younger sons of nobility who met as soldiers and are now trying desperately to settle back into peaceful Society. Ewan trusts his brawn more than his brains, but when he's offered a job watching the Duke of Ridlington's stubbornly independent daughter, he finds both are challenged.
Lady Lorraine wants none of her father's high-handed ways, and she'll do everything in her power to avoid her distressingly attractive bodyguard―until she lands herself in real trouble. Lorraine begins to see Ewan's protectiveness in a new light, and she can only hope that her stoic guardian will do for her what he's always done―fight for what he wants.
You Can Find it At:
Indiebound
Barnes & Noble
Amazon
Books-A-Million
Indigo
Apple Books
Kobo 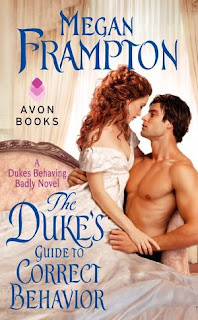 Title: The Duke's Guide to Correct Behavior
Author: Megan Frampton
Publisher: Avon
Release: November 25, 2014
Series: Dukes Behaving Badly #1
Pages: 375
My Review: 5 Stars
Synopsis:
All of London knows the Duke of Rutherford has position and wealth. They also whisper that he’s dissolute, devilish, and determinedly unwed. So why, everyone is asking, has he hired a governess?
When Miss Lily Russell crosses the threshold of the Duke of Rutherford’s stylish townhouse, she knows she has come face to face with sensual danger. For this is no doting papa. Rather, his behavior is scandalous, and his reputation rightly earned. And his pursuit of her is nearly irresistible—but resist she must for the sake of her pupil.
As for the duke himself, it was bad enough when his unknown child landed on his doorstep. Now Lily, with her unassuming beauty, has aroused his most wicked fantasies—and, shockingly, his desire to change his wanton ways. He’s determined to become worthy of her, and so he asks for her help in correcting his behavior.
But Lily has a secret, one that, if it becomes known, could change everything…
You Can Find it At:
Indiebound
Barnes & Noble
Amazon
iBooks
Posted by Isabel C at 3/20/2022 08:00:00 PM