Welcome to my stop on the Alone Out Here blog tour! I am thrilled to be hosting a spot on the ALONE OUT HERE by Riley Redgate Blog Tour hosted by Rockstar Book Tours. I am currently reading the book and absolutely loving it! The book can be hard, it is an apocalypse after all, but it's so good! I'll update the post with my review as soon as I finish it. 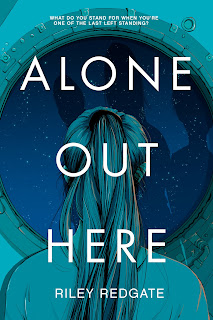 What do you stand for, when you're one of the last left standing?

The year is 2072. Soon a volcanic eruption will trigger catastrophic devastation, and the only way out is up.

While the world’s leaders, scientists, and engineers oversee the frantic production of a space fleet meant to save humankind, their children are brought in for a weekend of touring the Lazarus, a high-tech prototype spaceship. But when the apocalypse arrives months ahead of schedule, First Daughter Leigh Chen and a handful of teens from the tour are the only ones to escape the planet.

This is the new world: a starship loaded with a catalog of human artifacts, a frozen menagerie of animal DNA, and fifty-three terrified survivors. From the panic arises a coalition of leaders, spearheaded by the pilot’s enigmatic daughter, Eli, who takes the wheel in their hunt for a habitable planet. But as isolation presses in, their uneasy peace begins to fracture. The struggle for control will mean the difference between survival and oblivion, and Leigh must decide whether to stand on the side of the mission or of her own humanity.

With aching poignancy and tense, heart-in-your-mouth action, this enthralling saga will stay with readers long after the final page.
You Can Find it At:
Goodreads
Amazon
Kindle
Audible
B&N
iBooks
Kobo
TBD
Bookshop.org

"Redgate explores what makes us human and what makes us teens with excruciating precision, revealing the best―and worst―of both. A fast-paced, beautifully put together story of a girl getting it done."―E. K. Johnston, New York Times #1 best-selling author of Star Wars: Ahsoka

"With its diverse cast of characters and near-future plot line, this book would make a good addition to collections with established audiences for science fiction stories and titles featuring strong examples of female empowerment."―School Library Connection

“Stunning, visceral, and utterly gripping, Alone Out Here is a vivid look at human determination when forced to survive the impossible. Leigh Chen is a leader unlike any other as she navigates dwindling resources, betrayal, and the ultimate question of what it means to be human.”―C.B. Lee, author of the Sidekick Squad series

“Utterly absorbing, and packed with heart, action, and questions that lingered long past the final page. I read it in a single day.”―Amie Kaufman, author of the Aurora Cycle and the Elementals trilogy
Excerpt:
[Epigraph]
Tell me what you can’t forget, and I’ll tell you who you are. —Julie Buntin, Marlena
We long only for the world we were born into. —Emily St. John Mandel, Station Eleven
I remember one night more clearly than the rest. It was the hottest July on record, and I was fifteen, lying awake and sweaty on the faded linen sofa in Lilly’s basement. With the way the crickets were squalling, Lilly couldn’t get to sleep, which meant no chance of sleep for Marcus or me, either. So the three of us were talking ourselves out into the universe, fantasizing in  scratchy voices about God and death and the first day of sophomore year, and around two a.m.,  we wound up whispering about the end of the world.
We’d kicked the questions around before. Maybe you did, too. If the apocalypse hit tomorrow, which five people would you pick for your zombie survival team? Which three things  would you take down to the nuclear bunker? What would you save from the wasteland?
We never settled on answers. Lilly drifted off halfway through, and the next morning, Marcus kept swapping his choices back and forth, clarifying the rules over breakfast. “Is there internet in this wasteland?” he asked, thumbing his glasses up. “If I brought my headset, could I  have unlimited games?”
Lilly rolled her eyes and said, “God, Marcus, what kind of amateur apocalypse do you  think this is?” and I lay back in her window seat and laughed, loose-limbed, careless, because  everything we were saying felt unreal.
That was three years ago. Now, most nights, I lie awake and watch those moments replaying across the backs of my eyelids. I retrace the pikes of sunlight angled through the  kitchen window or feel the frayed threads of the sofa, the patches that Lilly’s golden retriever  pawed to death when he was too young to know better. I hear the way my best friends sighed  after they laughed, deep and contented, like they’d just taken a cold drink on a hundred-degree  day. It hurts to remember, knowing that two months later, the announcements froze that world  like amber engulfing a living thing. But I can’t make myself stop.
I wish I could show it to you, too—really show you. I wish I could scan my old life out  into VR space so you could walk all the way inside. We’d step through Lilly’s messy little kitchen like archaeologists through some perfectly preserved temple, and I’d pause the scene,  point to the scar on Lilly’s chin, and tell you that happened when we were thirteen, the day she  hacked off a foot of her hair with a pair of garden shears on a dare from Marcus. He wasn’t even  being serious, and as for me, I stood there and watched with a stupid grin on my face, not  believing it would happen until it did. And maybe you’d say Lilly sounds reckless or impulsive,  and Marcus and I should have known better. And I’d say, probably, but that’s Lilly, that’s Marcus, that’s us. That’s what I’d save.
About the Author:

Riley Redgate majored in Economics at Kenyon College and is now based in Chicago, where she was an apprentice with the Onion. She is the author of the critically acclaimed Seven Ways We Lie; Noteworthy, a Kirkus Reviews Best Teen Book and NYPL Best Book; and Final Draft, a Bank Street Book of the Year.

1 winner will receive a finished copy of ALONE OUT HERE, US Only.