My Two Cents On The Birth of YA

I've thought about this topic for a while, and after some prompting from Katrina at The Regulator Bookshop (where I'm going to be helping out at this summer!) I have decided to write a post about it.

YA (Young Adult) Fiction is a fairly new genre. Sure, there's been stuff *like* it for a while, but never like this. I've heard stories from my parents, and basically, they went straight from reading little kid stuff to adult stuff and comic books to classic sci-fi. Whereas I read picture books, then Babysitters Club, and then YA. How did this change occur? Here's my theory:

YA is, like other age groups of literature, made up of genres, and sometimes, even subsets of those genres. Each genre has its starting point that really kicked it off.

First, for the overall kickoff of YA and MG (middle grade) novels, I present to you, Harry Potter. It's a book series that everyone has heard of and most everyone has read. Harry Potter also helped launch books that are generally enjoyed by all ages and genders, such as Rick Riordan's books that followed. These books were SO popular that suddenly, a whole new genre exploded out of it.

(Yes, this woman basically gave birth to YA)

The paranormal aspect of YA was founded by Twilight, or at least the female centered aspect of it. Twilight delved into supernatural characters unlike they had ever been before. Suddenly, they were the good guys, and sexy at that. The immense popularity of those books gave publishers the push to publish other books that featured supernatural creatures in a new light. I am not a big fan of Twilight, but I am thankful for it. Books such as Vampire Academy, White Hot Kiss, Sweet Evil, and The Iron King, all of which I love.

(Despite how annoying she can be, you have to admit the world wouldn't be the same without her)

The contemporary aspect of YA is a tad older. Books such as the Babysitters Club, A-Z Mysteries, Cam Jansen, the Bailey School Kids, and more founded the contemporary genre. People who grew up reading those books had new ideas that probably merged them with the adult books they read soon after. Contemporary, I feel, is one of the slower growing areas of YA, at least in my library (only 44 out of my approximately 400 books are contemporary). Authors are finding the balance between too crazy, but not interesting enough. To say the least, without books such as the Babysitters Club, we would most likely not have the wonderful works such as The Fault in Our Stars, Eleanor & Park, and Pushing the Limits. Also, thanks to the aforementioned books such as A-Z Mysteries and Cam Jansen, combined sometimes with Harry Potter-esque books, we have YA mysteries and thrillers. Here is where we start to see some of the big crossovers between genres that wouldn't have happened without the rise of other books. Books such as Don't Look Back, Asylum, and The Unbecoming of Mara Dyer would not have been possible without the combinations of these new books. 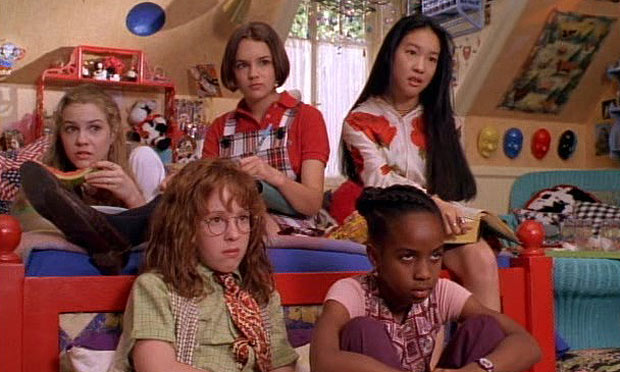 (How could these girls...

Lastly, the dystopian genre. You probably all know what I'm going to say here, The Hunger Games. The Hunger Games was revolutionary as far as books set in the future go. More often than not, up to that point, dystopian and sci-fi books were about guys who saved the day all the while destroying some alien race while the one or two females waited in the shadows. Basically, the middle ages set in the future. While there's nothing wrong in enjoying that type of books, more diversity was needed. The Hunger Games gave that diversity, while at the same time, addressing political and social issues. The Hunger Games portrayed a female who was both mentally strong, able to hold her family together after her fathers' death, and physically strong, need I explain more, which was very new. This launched the dystopian and sci-fi genre within YA. YA sci-fi still often gets a bad rap, due to the fact that it's not 'traditional' sci-fi. This incites all types of growling, but that's for a different rant conversation. The Hunger Games showed that YA could be action-packed, deep, romantic, and interesting, which was what the genre really needed. Thanks to it, we have Ignite Me, Cinder, Divergent, and Under the Never Sky. Modern science also helped contribute to these novels, but that's another story.

So, there's my two cents. Maybe not what truly caused the appearance of YA, but what I highly suspect did. So what do you suspect caused the birth out YA? Do you agree with my theory?
Posted by Isabel C at 5/25/2014 12:00:00 AM

Email ThisBlogThis!Share to TwitterShare to FacebookShare to Pinterest
Labels: Blogging