Top Ten Characters That Need Their OWN Book

Top Ten Tuesday is hosted by The Broke and the Bookish!

1. Puck from The Iron Fey series by Julie Kagawa - I want in this tricksters head!

2. Kat & Frosty from The White Rabbit Chronicles by Gena Showalter - Especially after the end of The Queen of Zombie Hearts, I want to know what they'll do!

3. Nico from The Percy Jackson series by Rick Riordan - Because he is made of adorable. Also, the son of Hades. 4. Ignifix from Cruel Beauty by Rosamund Hodge - He is the male lead, but I want HIS POV!

5. Tod from the Soul Screamers series by Rachel Vincent - We already have a novella from his POV, but I simply want MORE TODD!

6. Nikolai from Shadow and Bone by Leigh Bardugo - I feel like he really got the short end of the straw, and I want to see him be happy.

7. Jules from Die For Me by Amy Plum - Okay, we actually are getting this in the spring-ish, but I just want it now...

8. Morpheus from Splintered by A.G. Howard - Morpheus is mysterious, and I feel like we never get the true story from Alyssa's perspective. I want to know what HE thinks! 9. Roth from White Hot Kiss by Jennifer L. Armentrout - When someone's made of that much awesome, you always want to know more.

10. Kai from Sweet Evil by Wendy Higgins - Okay, we're getting this one too, but a year is too long to wait!!!! 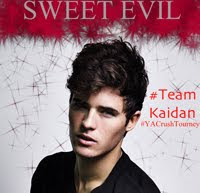