The Way We Bared Our Souls Review 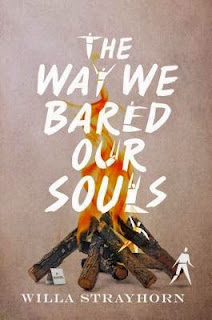 If you could trade your biggest burden for someone else’s, would you do it?

Five teenagers sit around a bonfire in the middle of the New Mexico desert. They don’t know it yet, but they are about to make the biggest sacrifice of their lives.

Lo has a family history of MS, and is starting to come down with all the symptoms.
Thomas, a former child soldier from Liberia, is plagued by traumatic memories of his war-torn past.
Kaya would do anything to feel physical pain, but a rare condition called CIP keeps her numb.
Ellen can’t remember who she was before she started doing drugs.
Kit lost his girlfriend in a car accident and now he just can’t shake his newfound fear of death.

When they trade totems as a symbol of shedding and adopting one another’s sorrows, they think it’s only an exercise.

But in the morning, they wake to find their burdens gone…and replaced with someone else’s.

As the reality of the ritual unfolds, this unlikely group of five embarks on a week of beautiful, terrifying experiences that all culminate in one perfect truth: In the end, your soul is stronger than your burdens.

I received this from Isabel- she hadn't read it and she thought I would like it. I took one look at it, read the back of the book, and went "yup, this is gonna kill me in the best way possible." I was so excited to read it, and I was ready to have ALL the feels.

Lo, the main character, is a kick butt girl, and I love her. She's terrified of her body, terrified that she has MS, and yet she still does her best to seem "normal" to her friends and to pretend she doesn't have MS. Her emotional growth through the book is beautiful- especially since we get to have her first person perspective the entire time. The other four characters are equally as amazing. Everything about them is so dense- so filled with emotion and real issues that you can feel the content overflowing from the book. You can see the characters vividly in your mind, you can actually feel their pain, and it makes the story that much more real.

The writing is beautiful. It's just honestly beautiful. It's elegantly scripted and it changes over the course of the book as Lo herself changes, which provides a stronger sense of authenticity. As the book goes on, the writing becomes more introspective, more thoughtful, and more complex. This is not to say that the writing isn't complex or talented in the beginning, for it is. Another thing I love about the writing is that it honestly feels like it's coming from a high school girl's mind.

It's set in "our" world- Strayhorn didn't build an entirely new world, but she did build a world focused on different cultures and beliefs. Jay is a man who wanders the woods with his coyote, Dakota. The ritual with the totems is based on Native American beliefs. I love that she brought diverse cultures and ideas into the light of contemporary novels. I honestly just love this book.