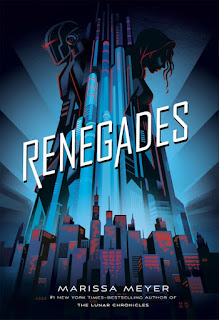 This week, I'm excited for Renegades by Marissa Meyer! I am a big fan of the recent superhero trend, in both books and movies. I also love Marissa Meyer! I loved The Lunar Chronicles as well. I'll hopefully get to see Marissa this fall, either at YALLFest or at her event at Quail Ridge Books.

The Renegades are a syndicate of prodigies—humans with extraordinary abilities—who emerged from the ruins of a crumbled society and established peace and order where chaos reigned. As champions of justice, they remain a symbol of hope and courage to everyone...except the villains they once overthrew.


Nova has a reason to hate the Renegades, and she is on a mission for vengeance. As she gets closer to her target, she meets Adrian, a Renegade boy who believes in justice—and in Nova. But Nova's allegiance is to a villain who has the power to end them both.