Blog Tour: The Cold is in Her Bones by Peternelle van Arsdale

Welcome to my stop on The Cold is in Her Bones blog tour! Read on for a review, tens list, and giveaway! 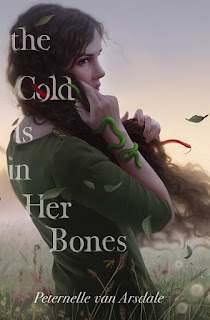 One girl must uncover secrets of the past to save her friend from a terrible curse in this dark and mesmerizing story of love, revenge, and redemption inspired by the myth of Medusa.

Milla knows two things to be true: Demons are real, and fear will keep her safe.

Milla’s whole world is her family’s farm. She is never allowed to travel to the village and her only friend is her beloved older brother, Niklas. When a bright-eyed girl named Iris comes to stay, Milla hopes her loneliness might finally be coming to an end. But Iris has a secret she’s forbidden to share: The village is cursed by a demon who possesses girls at random, and the townspeople live in terror of who it will come for next.

Now, it seems, the demon has come for Iris. When Iris is captured and imprisoned with other possessed girls, Milla leaves home to rescue her and break the curse forever. Her only company on the journey is a terrible new secret of her own: Milla is changing, too, and may soon be a demon herself.

Suspenseful and vividly imagined, The Cold Is in Her Bones is a novel about the dark, reverberating power of pain, the yearning to be seen and understood, and the fragile optimism of love.

After seeing the cover of The Cold is In Her Bones for the first time I was intrigued to say the least. While I wasn't super excited for it, when I heard it was a retelling of the Medusa myth, my excitement level jumped. And while the book was good, and didn't really feel like a Medusa retelling. Overall, the book was well written and enjoyable, but not necessarily a favorite of mine.

The main character of the book is Milla. From the get-go I really liked her. She was socially isolated and frustrated, which lead her to take risks in search of adventure. When another girl, Iris, shows up, Milla jumps on the chance to have a friend that understands her. But even from the beginning, they were on unequal footing because Iris had knowledge Milla didn't. Luckily that worked itself out, Milla is incredibly curious, and I grew to really like the relationship.

This book felt like it wanted a romance but wasn't quite sure how to do it. Or maybe it didn't want a romance but felt like it needed one. I'm not sure. Either way, I felt like I was getting notions of a romantic sub-plot the whole time I was reading without one ever coming to fruition. To me, it really felt like Milla had romantic feelings for Iris. That said, due to circumstances, Milla and Iris end up not interacting much over the course of the book. I could see it being that they have a new beginning, and a romance will come, or that Milla just doesn't want romance. But I would have liked to see it acknowledged one way or another.

One thing that was amazing was the world building. The book really felt like it was set in the world of a fairy tale. Not the Disney kind, but the Grimm Brothers kind. Everything had an air of the fantastic, was a bit spooky, and it seemed to have the hint of a moral lesson. Peternelle van Arsdale did a great job of creating a unique atmosphere in her sophomore novel!

2. Pride and Prejudice by Jane Austen

3. Sense and Sensibility by Jane Austen

6. A Wrinkle in Time by Madeline L’Engle

7. One Day in the Life of Ivan Denisovich by Alexander Soltzhenitsyn

8. The Complete Fairy Tales of the Brothers Grimm

9. The Witches by Roald Dahl

10. To Kill a Mockingbird by Harper Lee

"A dark and enchanting tale about friendship, pain, revenge, and the power of love, The Cold Is in Her Bones is the perfect read for Greek mythology fans and YA readers alike." ―Bustle

“Fiercely written and beautifully feminist, The Cold is in Her Bones reminds us of the power of loyalty and love in the face of ignorance and fear. I loved this tale of dangerous girls with wild hair and tangled hearts.” ―Lisa Maxwell, New York Times bestselling author of The Last Magician

“A fresh, eerily compelling tale of betrayal, revenge, and the ties that bind. When van Arsdale paints a world, you can feel the fog against your skin.” ―Elly Blake, New York Times bestselling author of The Frostblood Saga 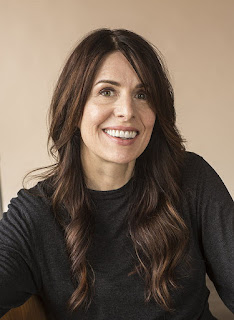 Peternelle van Arsdale grew up in Newark, New Jersey, where she attended public school through the eighth grade. After that she attended three high schools in three different towns in four years, was deeply unpopular, and counted the seconds until graduation. She majored in English literature at Bryn Mawr College, and then landed in book publishing, thinking it was a good way to be paid to do what she liked to do anyway (she was only partly wrong). She worked her way up from editorial assistant to executive editor of adult fiction and nonfiction, and eventually struck out on her own as an independent editor.

Her first young adult novel, The Beast Is an Animal, is being developed by Amazon Studios for a feature film produced by Ridley Scott’s Scott Free and directed by Bert & Bertie. Her essays have been published by LitHub, Hypable.com, and Culturefly, and her short fiction has been published by The Whitefish Review.

Her second novel, The Cold is in Her Bones , will be published in January 2019. She lives in Brooklyn, New York, where she continues to edit and is at work on her third novel. 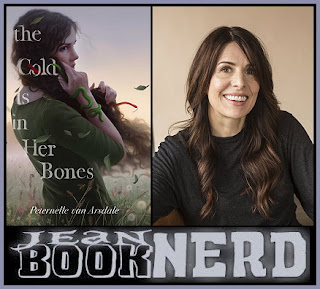 1 Winner will receive a Set of Book from Peternelle van Arsdale (THE COLD IS IN HER BONES and THE BEAST IS AN ANIMAL).