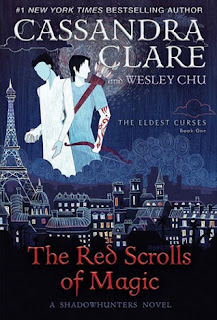 This week I am super excited for The Red Scrolls of Magic by Cassandra Clare and Wesley Chu. I adore the Shadowhunters world. I'm excited to see Magnus and Alex's adventures in this book and how it connects to the rest of the Shadowhunter world. It's hard to articulate how excited I am for this book. We also don't really know what'll happen since it's the first book in a new series. My bet is it'll be amazing, like all the previous books have been!

Magnus Bane, a centuries old High Warlock, has taken possession of one of the great relics of the supernatural world, a powerful spell book of dark magic known as The Book of the White and there are many who want to claim it for themselves.

After the Mortal War where the part-human and part-angel Shadowhunters teamed with the part human-demon Downworlders to fight against the incursion of an army of demons, Magnus and his new lover, the mortal Alec Lightwood celebrate their survival and victory by escaping the supernatural battlefield of New York City by touring the world, but the world won’t leave them alone.


The first adult novel set within #1 New York Times bestselling author Cassandra Clare’s Shadowhunter series, The Lost Book of the White, written with award-winning science fiction author Wesley Chu, is a fantasy thriller that will give new readers a great way to enter the Shadowhunters world and give the millions of readers across the globe answers they’ve been looking for in this start of The Eldest Curses trilogy.