I am super excited to be part of the blog tour for Foul is Fair by Hannah Capin! 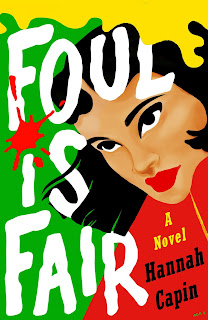 Hannah Capin's Foul is Fair is a bloody, thrilling revenge fantasy for the girls who have had enough. Golden boys beware: something wicked this way comes.

Jade and her friends Jenny, Mads, and Summer rule their glittering LA circle. Untouchable, they have the kind of power other girls only dream of. Every party is theirs and the world is at their feet. Until the night of Jade's sweet sixteen, when they crash a St. Andrew’s Prep party. The night the golden boys choose Jade as their next target.

They picked the wrong girl.

Sworn to vengeance, Jade transfers to St. Andrew’s Prep. She plots to destroy each boy, one by one. She'll take their power, their lives, and their control of the prep school's hierarchy. And she and her coven have the perfect way in: a boy named Mack, whose ambition could turn deadly.

You Can Find it At:
Regulator Bookshop
Amazon
Barnes and Noble
IndieBound
iBooks
Goodreads

For every girl who wants revenge

The primary thematic material of Foul is Fair centers on sexual assault (not depicted), rape culture, and violence. Additionally, the book includes an abusive relationship, a suicide attempt, and a brief scene with transphobic bullying. For a more detailed description of sensitive content, please visit hannahcapin.com/foulisfair.

Sweet sixteen is when the claws come out.

We’re all flash tonight. Jenny and Summer and Mads and me. Vodka and heels we could never quite walk in before, but tonight we can. Short skirts—the shortest. Glitter and highlight. Matte and shine. Long hair and whitest-white teeth.

I’ve never been blond before but tonight my hair is platinum. Mads bleached it too fast but I don’t care because tonight’s the only night that matters. And my eyes are jade-green tonight instead of brown, and Summer swears the contacts Jenny bought are going to melt into my eyes and I’ll never see again, but I don’t care about that, either.

Tonight Jenny and Summer and Mads and me, we’re four sirens, like the ones in those stories. The ones who sing and make men die.

Tonight we’re walking up the driveway to our best party ever. Not the parties like we always go to, with the dull-duller- dullest Hancock Park girls we’ve always known and the dull-duller-dullest wine coolers we always drink and the same bad choice in boys.

We smile at the door. They let us in. Our teeth flash. Our claws glimmer. Mads laughs so shrill-bright it’s almost a scream. Everyone looks. We all grab hands and laugh together and then everyone, every charmed St Andrew’s Prepper is cheering for us and I know they see it—
for just a second—
—our fangs and our claws.

The first thing I do is cut my hair.

But it isn’t like in the movies, those crying girls with mascara streaks and kindergarten safety scissors, pink and dull, looking into toothpaste specks on medicine cabinet mirrors.

I wash my makeup off first. I use the remover I stole from Summer, oily Clinique in a clear bottle with a green cap. Three minutes later I’m fresh-faced, wholesome, girl-next-door,  and you’d almost never know my lips are still poison when I look the way a good girl is supposed to look instead of like that little whore with the jade-green eyes.

Then I take the knife, the good long knife from the wedding silver my sister hid in the attic so she wouldn’t have to think about the stupid man who never deserved her anyway. The marriage was a joke but the knife is perfectly, wickedly beautiful: silver from handle to blade and so sharp you bleed a little just looking at it. No one had ever touched it until I did, and when I opened the box and lifted the knife off the dark red velvet, I could see one slice of my reflection looking back from the blade, and I smiled.

I pull my hair tight, the long hair that’s been mine since those endless backyard days with Jenny and Summer and Mads. Always black, until Mads bleached it too fast, but splintering platinum blond for the St. Andrew’s party on my sweet sixteen. Ghost-bright hair from Mads and jade-green eyes from Jenny and contour from Summer, almost magic, sculpting me into a brand-new girl for a brand-new year.

My hair is thick, but I’ve never been one to flinch. I stare myself straight in the eyes and slash once—

And that’s it. Short hair.

I dye it back to black, darker than before, with the cheap box dye I made Jenny steal from the drugstore. Mads revved her Mustang, crooked across two parking spots at three in the morning, and I said:

Get me a color that knows what the fuck it’s doing.

Jenny ran back out barefoot in her baby-pink baby-doll dress and flung herself into the back seat across Summer’s lap, and Mads was out of the lot and onto the road, singing through six red lights, and everything was still slow and foggy and almost like a dream, but when Jenny threw the box onto my knees I could see it diamond-clear. Hard black Cleopatra bangs on the front and the label, spelled out plain: #010112 REVENGE. So I said it out loud:

And Mads gunned the engine harder and Summer and Jenny shrieked war-cries from the back seat and they grabbed my hand, all three of them, and we clung together so tight I could feel blood under my broken claws.

So in the bathroom, an hour later and alone, I dye my hair revenge-black, and I feel dark wings growing out of my back, and I smile into the mirror at the girl with ink-stained fingers and a silver sword.

Then I cut my broken nails to the quick.

Then I go to bed.

In the morning I put on my darkest lipstick before it’s even breakfast time, and I go to Nailed It with a coffee so hot it burns my throat. The beautiful old lady with the crooked smile gives me new nails as long as the ones they broke off last night, and stronger.

She looks at the bruises on my neck and the scratches across my face, but she doesn’t say anything.

So I point at my hair, and I say, This color. Know what it’s called?

She shakes her head: No.

She says, Good girl. Kill him.

Hannah Capin is the author of Foul is Fair and The Dead Queens Club, a feminist retelling of the wives of Henry VIII. When she isn’t writing, she can be found singing, sailing, or pulling marathon gossip sessions with her girl squad. She lives in Tidewater, Virginia.

"Fierce, vicious, and electric. If books had teeth, Foul Is Fair would have fangs. Capin's language glitters dark and her writing cuts deep. Revenge is a dish best served by this deliciously unapologetic coven." - Laurie Elizabeth Flynn, author of Firsts and Last Girl Lied To

"Capin’s writing will seduce you with its beauty and then, when you least suspect it, slice you to the bone—just like Foul is Fair’s captivating, vicious, entirely unforgettable heroine, Jade." - Layne Fargo, author of Temper and co-host of Unlikeable Female Characters Podcast

“Vicious and beautifully brutal, Foul is Fair gives a sword to every girl who has ever been a victim and makes them a warrior. This book is pulls no punches and will make anyone think twice before uttering the phrase ‘just a girl’. An unapologetic feminist battle-cry that leaves you breathless and thirsting for vengeance.” - Sonia Hartl, author of Have a Little Faith in Me

"Foul is Fair delivers the story of a girl who snatches control back from a world that stole it away, through whatever means necessary. Hannah Capin deftly combines stunningly lyrical prose with the raw power of engulfing fury, sending a message written in blood. In a world where too many are forced into silence, this book roars back." - S. Gonzales, author of The Law of Inertia and Only Mostly Devastated