Welcome to part two of this week's Quarantine Releases! There's a variety of genres today, so there's something for everyone!
Harrow Lake by Kat Ellis 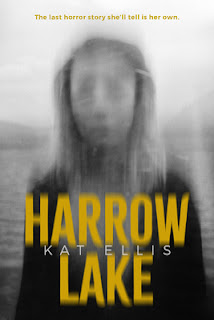 A can't-put-down, creepy thriller about the daughter of a horror film director who's not afraid of anything--until she gets to Harrow Lake.
Things I know about Harrow Lake:
1. It's where my father shot his most disturbing slasher film.
2. There's something not right about this town.
Lola Nox is the daughter of a celebrated horror filmmaker--she thinks nothing can scare her.
But when her father is brutally attacked in their New York apartment, she's quickly packed off to live with a grandmother she's never met in Harrow Lake, the eerie town where her father's most iconic horror movie was shot. The locals are weirdly obsessed with the film that put their town on the map--and there are strange disappearances, which the police seem determined to explain away.
And there's someone--or something--stalking her every move.
The more Lola discovers about the town, the more terrifying it becomes. Because Lola's got secrets of her own. And if she can't find a way out of Harrow Lake, they might just be the death of her.
Places to Purchase:
Indiebound
Barnes & Noble
Amazon
Ironspark by C.M. McGuire 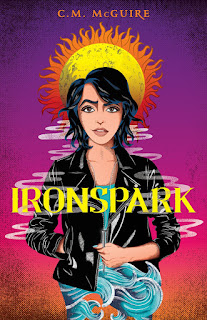 A teen outcast must work together with new friends to keep her family and town safe from murderous Fae while also dealing with panic attacks, family issues, and a lesbian love triangle in C.M. McGuires's kick-butt paranormal YA debut, Ironspark.
For the past nine years, ever since a bunch of those evil Tinkerbells abducted her mother, cursed her father, and forced her family into hiding, Bryn has devoted herself to learning everything she can about killing the Fae. Now it’s time to put those lessons to use.
Then the Court Fae finally show up, and Bryn realizes she can’t handle this on her own. Thankfully, three friends offer to help: Gwen, a kindhearted water witch; Dom, a new foster kid pulled into her world; and Jasika, a schoolmate with her own grudge against the Fae.
But trust is hard-won, and what little Bryn has gained is put to the test when she uncovers a book of Fae magic that belonged to her mother. With the Fae threat mounting every day, Bryn must choose between faith in her friends and power from a magic that could threaten her very humanity.
Places to Purchase:
Indiebound
Barnes & Noble
Amazon
The Companion by Katie Alender 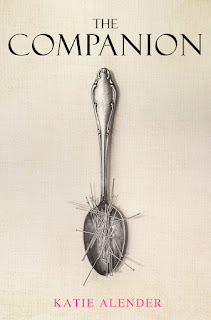 The other orphans say Margot is lucky.
Lucky to survive the horrible accident that killed her family.
Lucky to have her own room because she wakes up screaming every night.
And finally, lucky to be chosen by a prestigious family to live at their remote country estate.
But it wasn't luck that made the Suttons rescue Margot from her bleak existence at the group home. Margot was handpicked to be a companion to their silent, mysterious daughter, Agatha. At first, helping with Agatha--and getting to know her handsome older brother--seems much better than the group home. But soon, the isolated, gothic house begins playing tricks on Margot’s mind, making her question everything she believes about the Suttons . . . and herself.
Margot’s bad dreams may have stopped when she came to live with Agatha – but the real nightmare has just begun.
Places to Purchase:
Indiebound
Barnes & Noble
Amazon
Darius the Great Deserves Better by Adib Khorram 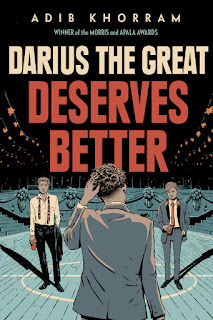 In this companion to the award-winning Darius the Great Is Not Okay, Darius suddenly has it all: a boyfriend, an internship, a spot on the soccer team. It’s everything he’s ever wanted–but what if he deserves better?
Darius Kellner is having a bit of a year. Since his trip to Iran this past spring, a lot has changed. He’s getting along with his dad, and his best friend Sohrab is only a Skype call away. Between his first boyfriend, Landon, his varsity soccer practices, and his internship at his favorite tea shop, Darius is feeling pretty okay. Like he finally knows what it means to be Darius Kellner.
Then, of course, everything changes. Darius’s grandmothers are in town for a long visit while his dad is gone on business, and Darius isn’t sure whether they even like him. The internship isn’t what Darius thought it would be, and now he doesn’t know about turning tea into his career. He was sure he liked Landon, but when he starts hanging out with Chip–soccer teammate and best friend of Trent Bolger, epic bully–well, he’s just not so sure about Landon anymore, either.
Darius thought he knew exactly who he was and what he wanted, but maybe he was wrong. Maybe he deserves better.
Places to Purchase:
Indiebound
Barnes & Noble
Amazon
Where Dreams Descend by Janella Angeles 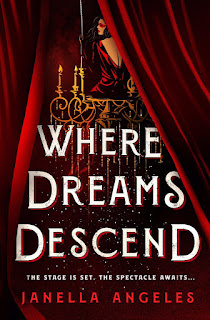 In a city covered in ice and ruin, a group of magicians face off in a daring game of magical feats to find the next headliner of the Conquering Circus, only to find themselves under the threat of an unseen danger striking behind the scenes.
As each act becomes more and more risky and the number of missing magicians piles up, three are forced to reckon with their secrets before the darkness comes for them next.
The Star: Kallia, a powerful showgirl out to prove she’s the best no matter the cost
The Master: Jack, the enigmatic keeper of the club, and more than one lie told
The Magician: Demarco, the brooding judge with a dark past he can no longer hide
Where Dreams Descend is the startling and romantic first book in Janella Angeles’ debut Kingdom of Cards fantasy duology where magic is both celebrated and feared, and no heart is left unscathed.
Places to Purchase:
Indiebound
Barnes & Noble
Amazon
The Con Code by Shana Silver 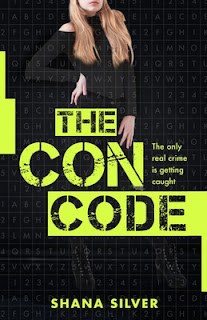 A teen forger and thief forms a criminal crew from her high school friends (and crush) to perform a series of heists leading to the location of her missing mother in this action-packed contemporary YA novel.
By day, seventeen-year-old Fiona Spangler runs small cons for her ritzy prep-school classmates: getting them out of tests and forging fake hall passes. But by night, Fiona joins her dad on riskier heists: stealing back the clue-filled forgeries her mom scattered across the country before she disappeared. Fiona desperately hopes that her mother will be waiting at the end of the scavenger hunt she left behind.
And they are SO close. Just three more heists remain, but then disaster strikes when Fiona’s dad is captured by the FBI. Desperate to finish the job and save what’s left of her family, Fiona assembles of crew of teen criminals: a master of disguise who can transform into anyone, a talented hacker who only communicates in glares, and a rival con artist with a vendetta against—and possible crush on—Fiona.
All they have to do is perform three nearly impossible heists, solve her mother’s incredibly complex clues, and evade the FBI. Easy, right?
Places to Purchase:
Indiebound
Barnes & Noble
Amazon
Lost Roads by Jonathan Maberry 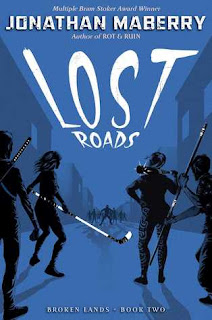 Gutsy Gomez’s danger-filled journey to save those infected with the zombie plague continues in New York Times bestselling author Jonathan Maberry’s terrifying follow-up to Broken Lands.
Gabriella “Gusty” Gomez lost her mother, and now she’s losing her home.
Gutsy and her friends, along with Benny and his crew, have just survived a massive attack on New Alamo by the Night Army—a mix of mindless shambling los muertos and sentient half-zombie ravagers. She’s also reeling from the revelation that the residents of her town were the lab rats of the biological testing facility linked to creating the most dangerous zom, the Raggedy Man, who controls all of the living dead.
And the first raid was only a test. The real Night Army is coming, and this time, it’ll be a handful of survivors against seven billion zombies.
Places to Purchase:
Indiebound
Barnes & Noble
Amazon
Traitor by Amanda McCrina 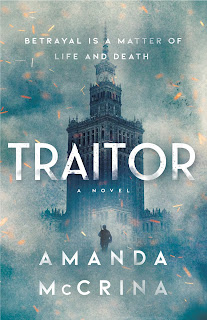 Poland, 1944. After the Soviet liberation of Lwów from Germany, the city remains a battleground between resistance fighters and insurgent armies, its loyalties torn between Poland and Ukraine.
Seventeen-year-old Tolya Korolenko is half Ukrainian, half Polish, and he joined the Soviet Red Army to keep himself alive and fed. When he not-quite-accidentally shoots his unit's political officer in the street, he's rescued by a squad of Ukrainian freedom fighters. They might have saved him, but Tolya doesn't trust them. He especially doesn't trust Solovey, the squad's war-scarred young leader, who has plenty of secrets of his own.
Then a betrayal sends them both on the run. And in a city where loyalty comes second to self-preservation, a traitor can be an enemy or a savior—or sometimes both.
Places to Purchase:
Indiebound
Barnes & Noble
Amazon
Twin Daggers by MarcyKate Connolly 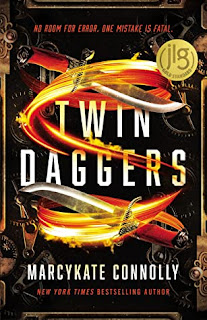 Aissa's life is a web of carefully constructed lies. She and her twin sister, Zandria, are Magi spies, magic users most believe to be extinct. And they're on a mission for revenge.
This action & adventure spy thriller--a fantasy spin on Romeo and Juliet from New York Times bestselling author MarcyKate Connolly--is perfect for fans of Marissa Meyer and Elly Blake and is about to become your new obsession!
By day, Aissa and Zandria play the role of normal young Technocrats eager to fulfill the duties of their new apprenticeships. By night, they plot their revenge to retake their city from the Technocrats. But then Aissa is given a new mission: find the heir to the Technocrat throne, who is rumored to be one of the Heartless, and kidnap her. Born without a working heart, the Heartless survive with a mechanical replacement.
Aissa is more likely to be caught than to be successful, but she's never been one to turn down an assignment, even if the hunt is complicated by a kind Technocrat researcher who is determined to find a cure for the Heartless. But when Zandria is captured by the Technocrats, Aissa will do anything to get her sister back. Even if it means abandoning all other loyalties--and missions--and deciding whether or not it's worth risking everything on getting help from her sworn enemies.
Places to Purchase:
Indiebound
Barnes & Noble
Amazon
Are you particularly excited for any of these books? Let me know in the comments!
Posted by Isabel C at 8/27/2020 12:00:00 AM