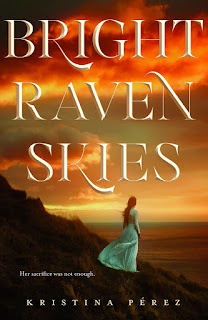 Bright Raven Skies is the thrilling conclusion to the lush and heart-wrenching romantic fantasy trilogy about ancient magic, warring families, and star-crossed lovers by Kristina Pérez.
To save the kingdom, Branwen embraced the darkest aspects of her magic. But she may have lost herself––and the two people she loves most.
Tristan and Eseult are missing. As Branwen searches for them, she must hide the truth surrounding their disappearance from both the king and her lover. Above all, she must find the Queen and her Champion first.
New and old enemies circle Branwen, clamoring for power and revenge, and threatening to destroy the fragile peace that she has sacrificed everything to secure.
Places to Purchase:
Indiebound
Barnes & Noble
Amazon
Kind of a Big Deal by Shannon Hale 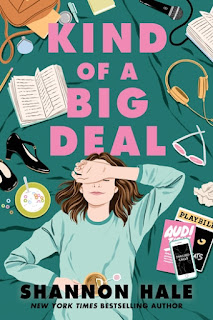 From Shannon Hale, bestselling author of Austenland, comes Kind of a Big Deal: a hilarious, madcap story that will suck you in―literally.
There's nothing worse than peaking in high school. Nobody knows that better than Josie Pie.
She was kind of a big deal―she dropped out of high school to be a star! But the bigger you are, the harder you fall. And Josie fell. Hard. Ouch. Broadway dream: dead.
Meanwhile, her life keeps imploding. Best friend: distant. Boyfriend: busy. Mom: not playing with a full deck? Desperate to escape, Josie gets into reading.
Literally. She reads a book and suddenly she's inside it. And with each book, she’s a different character: a post-apocalyptic heroine, the lead in a YA rom-com, a 17th century wench in a corset.
It’s alarming. But also . . . kind of amazing?
It’s the perfect way to live out her fantasies. Book after book, Josie the failed star finds a new way to shine. But the longer she stays in a story, the harder it becomes to escape.
Will Josie find a story so good that she just stays forever?
Places to Purchase:
Indiebound
Barnes & Noble
Amazon
Now That I've Found You by Kristina Forest 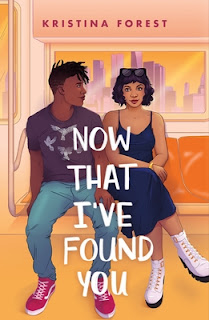 A YA novel about searching for answers, love, and your eccentric grandma in all the wrong places.
Following in the footsteps of her überfamous grandma, eighteen-year-old Evie Jones is poised to be Hollywood’s next big star. That is until a close friend’s betrayal leads to her being blacklisted . . .
Fortunately, Evie knows just the thing to save her floundering career: a public appearance with America’s most beloved actress—her grandma Gigi, aka the Evelyn Conaway. The only problem? Gigi is a recluse who’s been out of the limelight for almost twenty years. Days before Evie plans to present her grandma with an honorary award in front of Hollywood’s elite, Gigi does the unthinkable: she disappears.
With time running out and her comeback on the line, Evie reluctantly enlists the help of the last person to see Gigi before she vanished: Milo Williams, a cute musician Evie isn’t sure she can trust. As Evie and Milo conduct a wild manhunt across New York City, romance and adventure abound while Evie makes some surprising discoveries about her grandma—and herself.
Places to Purchase:
Indiebound
Barnes & Noble
Amazon
The Nemesis by S.J. Kincaid 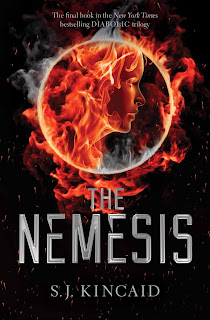 In the heart-pounding conclusion to the New York Times bestselling Diabolic series, the Empire teeters on the edge of destruction as rumors spread that Nemesis is still alive.
Three years ago, Tyrus Domitrian shocked the universe by killing the woman he swore to love forever. The woman for whom he upended the Empire. The woman with whom he wanted to build a new, and brighter, future.
Now, the once-idealistic heir apparent has become the cruel Emperor Tyrus, wielding his authority with an iron fist, capable of destroying galaxies with a single word, controlling all technology with a simple thought. He has bent the Grandiolquy to their knees, and none have the power to stand against him.
But there is a muttering among the Excess. They say that Nemesis is not truly gone. They mutter of her shadow spotted in distant galaxies. They say that Nemesis lives. That she will rise, and rally the people to topple man who was once her truest love—and is now her fiercest enemy.
Places to Purchase:
Indiebound
Barnes & Noble
Amazon
The Whitsun Daughters by Carrie Mesrobian 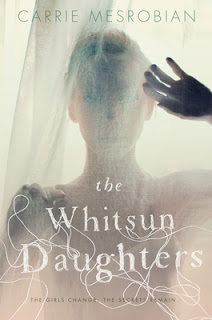 From a critically acclaimed author, a twisty and gorgeously written YA ghost story about young women separated by centuries but connected by a desire to control their futures.
"How quickly everything in the world disintegrates. Everything but the loneliness of young women."
So begins The Whitsun Daughters, a story of three contemporary teenage girls--sisters and cousins--in a small Midwestern town, narrated by the ghost of a young woman who, over a century earlier, lived and loved on the same small patch of farmland the girls now call home.
The book follows both the present-day story of the three Whitsun girls and the story of Jane Murphy a century earlier as they fight to assert their own desires in worlds determined to ignore and minimize them. The Whitsun girls struggle with an unplanned pregnancy. Jane is determined to defy her arranged marriage and have both the baby she carries and the young man she loves.
The Whitsun Daughters leaves readers with a profound sense of the unbreakable thread connecting generations of young women who sought and continue to seek control their destinies.
Places to Purchase:
Indiebound
Barnes & Noble
Amazon
The Burning Kingdoms by Sally Green 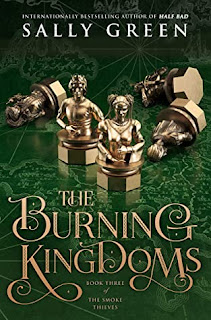 The heart-pounding conclusion to the daring Smoke Thieves trilogy.
In this conclusion to the epic Smoke Thieves trilogy, the world has erupted into all-out war. King Aloysius is mining powerful demon smoke and using it to fuel an unstoppable army of children. March, now banished for treason, has joined up with this boy army. Forbidden from ever seeing Edyon again, and overwhelmed by his own betrayal, March no longer cares if he lives or dies.
Catherine--now queen of Pitoria--must find a way to defeat the boy army, while also grappling with her own troubles: her secret demon smoke addiction, and unresolved tension with her former lover, Ambrose. Catherine seeks military support from Calidor by reaching out to her illegitimate cousin Edyon, who has been proclaimed heir to the Calidorian throne. But Edyon has almost no power as he's entangled in the unfamiliar machinations and manipulations of the royal court, finding that being the claimed son of a prince may be no easier than being a bastard.
With Catherine, his love, now married off and moving on, and his brother and sister tortured and executed before him, Ambrose doesn't know what his role in this world is any more. He leads an expedition into the demon world, hoping to destroy the boy army's stores of demon smoke. In this underground world, he runs into Tash, whom everyone had believed dead. She has survived in this new world using magical abilities that, prior to now, only demons had.
Aloysius will send his demon smoke-powered boy army to kill them all, if he can. But what nobody knows is that there is more to the smoke than meets the eye...
Places to Purchase:
Indiebound
Barnes & Noble
Amazon
Clown in a Cornfield by Adam Cesare 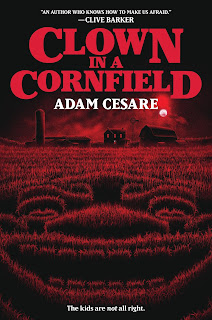 Quinn Maybrook just wants to make it until graduation. She might not make it to morning.
Quinn and her father moved to tiny, boring Kettle Springs to find a fresh start. But ever since the Baypen Corn Syrup Factory shut down, Kettle Springs has cracked in half. On one side are the adults, who are desperate to make Kettle Springs great again, and on the other are the kids, who want to have fun, make prank videos, and get out of Kettle Springs as quick as they can.
Kettle Springs is caught in a battle between old and new, tradition and progress. It’s a fight that looks like it will destroy the town. Until Frendo, the Baypen mascot, a creepy clown in a pork-pie hat, goes homicidal and decides that the only way for Kettle Springs to grow back is to cull the rotten crop of kids who live there now.
Places to Purchase:
Indiebound
Barnes & Noble
Amazon
Entwined by A.J. Rosen 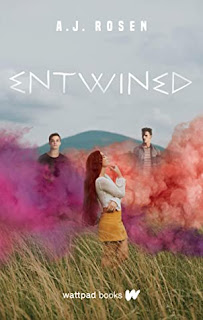 Sometimes love gets a bit twisted.
Avery Montgomery doesn’t even know if she wants a soul mate.
As a member of the Hellenicus—a race founded in antiquity and descended directly from the Greek gods—Avery’s attending her first Gathering where she’ll gain the ability to entwine her thoughts with her destined soul mate and be tied to them forever.
But all is not as it seems at the Royal Court. There are severe and strange looks from the elders, whisperings from the ancient Dodona tree, and encounters with spirits who seem to know Avery better than she knows herself.
Throughout these whirlwind events at Court, Avery finds herself torn between her feelings for the wise and protective Vladimir and the passionate, fun-loving Adrian. Unwilling to surrender her independence or to betray her heart, Avery must decide once and for all if she’ll give in to her desires and risk the wrath of the Gods.
Because who are you if your destiny lies with another person?
Places to Purchase:
Indiebound
Barnes & Noble
Amazon
The Assignment by Liza M. Wiemer 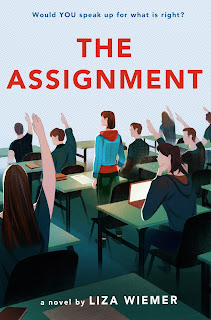 In the vein of the classic The Wave and inspired by a real-life incident, this riveting novel explores discrimination and antisemitism and reveals their dangerous impact.
SENIOR YEAR. When an assignment given by a favorite teacher instructs a group of students to argue for the Final Solution, a euphemism used to describe the Nazi plan for the genocide of the Jewish people, Logan March and Cade Crawford are horrified. Their teacher cannot seriously expect anyone to complete an assignment that fuels intolerance and discrimination. Logan and Cade decide they must take a stand.
As the school administration addressed the teens' refusal to participate in the appalling debate, the student body, their parents, and the larger community are forced to face the issue as well. The situation explodes, and acrimony and anger result. What does it take for tolerance, justice, and love to prevail?
Places to Purchase:
Indiebound
Barnes & Noble
Amazon
This is just the first half of this week's new releases, so tune in tomorrow for more awesome books!
Posted by Isabel C at 8/26/2020 12:00:00 AM