It's new releases time! Posting this on Monday makes it feel like it's a little closer to Tuesday. This is great for two reasons 1) Mondays in general are tough and 2) I get new books on Tuesdays! And so do you! So check out this week's great new releases!
White Fox by Sara Faring 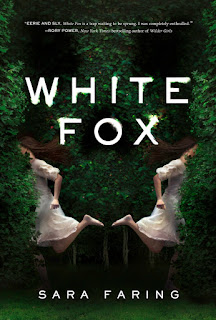 After their world-famous actor mother disappeared under mysterious circumstances, Manon and Thaïs left their remote Mediterranean island home—sent away by their pharma-tech tycoon father. Opposites in every way, the sisters drifted apart in their grief. Yet their mother's unfinished story still haunts them both, and they can't put to rest the possibility that she is still alive.
Lured home a decade later, Manon and Thaïs discover their mother’s legendary last work, long thought lost: White Fox, a screenplay filled with enigmatic metaphors. The clues in this dark fairytale draw them deep into the island's surreal society, into the twisted secrets hidden by their glittering family, to reveal the truth about their mother—and themselves.
Places to Purchase:
Indiebound
Barnes & Noble
Amazon
Vampires Never Get Old: Tales With Fresh Bite edited by Zoraida Córdova and Natalie C. Parker 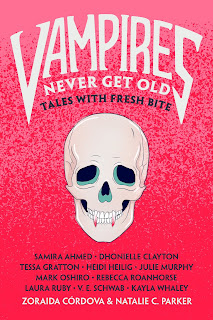 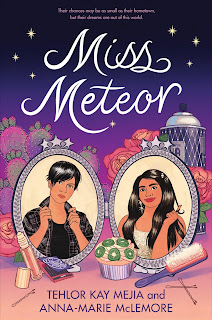 There hasn’t been a winner of the Miss Meteor beauty pageant who looks like Lita Perez or Chicky Quintanilla in all its history. But that’s not the only reason Lita wants to enter the contest, or why her ex-best friend Chicky wants to help her. The road to becoming Miss Meteor isn’t about being perfect; it’s about sharing who you are with the world—and loving the parts of yourself no one else understands. So to pull off the unlikeliest underdog story in pageant history, Lita and Chicky are going to have to forget the past and imagine a future where girls like them are more than enough—they are everything.
Witty and heartfelt with characters that leap off the page, Miss Meteor is acclaimed authors Anna-Marie McLemore and Tehlor Kay Mejia’s first book together.
Places to Purchase:
Indiebound
Barnes & Noble
Amazon
Far From Normal by Becky Wallace 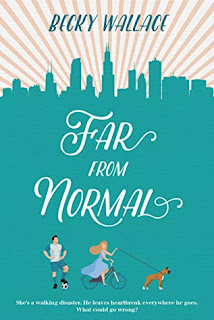 From Stealing Home author Becky Wallace comes a Devil Wears Prada-inspired YA romance, in which “normal girl” Maddie must repair the image of Major League Soccer’s bad boy to ace her internship. A perfect read for fans of Morgan Matson and Miranda Kenneally.
Maddie McPherson is sick of Normal—both her hometown of Normal, Illinois and being the ‘normal’ sibling. But when she lands a summer internship with a sports marketing firm, she finally has a chance to crawl out of her genius brother’s shadow. Not to mention, a glowing letter of recommendation could secure her admission to her dream college.
But Maddie’s nickname is “CalaMaddie” for a reason, and when the company tasks her with repairing the image of teen soccer phenom Gabriel Fortunato, she wonders if she’s set herself up for embarrassment. Gabriel is a tabloid magnet, who’s best-known for flubbing Italy’s World Cup hopes. As Maddie works with him to develop “pleasant and friendly” content for social media, she also learns he’s thoughtful, multi-talented, and fiercely loyal—maybe even to a fault. Falling for a footballer is exactly how CalaMaddie would botch this internship, but with the firm pressuring her to get the job done, perhaps her heart is worth risking?
Places to Purchase:
Indiebound
Barnes & Noble
Amazon
Early Departures by Justin A. Reynolds 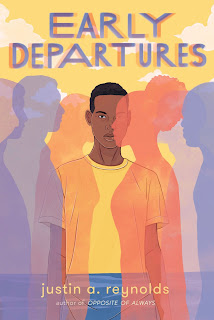 Justin A. Reynolds, author of Opposite of Always, delivers another smart, funny, and powerful stand-alone YA contemporary novel, with a speculative twist in which Jamal’s best friend is brought back to life after a freak accident . . . but they only have a short time together before he will die again.
Jamal’s best friend, Q, doesn’t know he’s about to die . . . again.
He also doesn’t know that Jamal tried to save his life, rescuing him from drowning only to watch Q die later in the hospital. Even more complicated, Jamal and Q haven’t been best friends in two years—not since Jamal’s parents died in a car accident, leaving him and his sister to carry on without them. Grief swallowed Jamal whole, and he blamed Q for causing the accident.
But what if Jamal could have a second chance? An impossible chance that would grant him the opportunity to say goodbye to his best friend? A new health-care technology allows Q to be reanimated—brought back to life like the old Q again. But there’s a catch: Q will only reanimate for a short time before he dies . . . forever.
Jamal is determined to make things right with Q, but grief is hard to shake. And he can’t tell Q why he’s suddenly trying to be friends with him again. Because Q has no idea that he died, and Q’s mom is not about to let anyone ruin the miracle by telling him. How can Jamal fix his friendship with Q if he can’t tell him the truth?
Places to Purchase:
Indiebound
Barnes & Noble
Amazon
Smash It! by Francina Simone 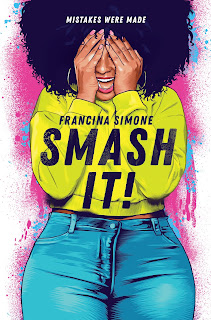 Refreshingly authentic and bold... Don't miss this smashing #ownvoices novel from Francina Simone! Filled with heart, humor and a heroine to root for, Smash It! is a perfect read for fans of Julie Murphy, Ibi Zoboi and Ashley Poston.
Olivia "Liv" James is done with letting her insecurities get the best of her. So she does what any self-respecting hot mess of a girl who wants to SMASH junior year does...
After Liv shows up to a Halloween party in khaki shorts--why, God, why?--she decides to set aside her wack AF ways. She makes a list--a F*ck-It list.
1. Be bold--do the thing that scares me.
2. Learn to take a compliment.
3. Stand out instead of back.
She kicks it off by trying out for the school musical, saying yes to a date and making new friends. Life is great when you stop punking yourself! However, with change comes a lot of missteps, and being bold means following her heart. So what happens when Liv's heart is interested in three different guys--and two of them are her best friends? What is she supposed to do when she gets dumped by a guy she's not even dating? How does one Smash It! after the humiliation of being friend-zoned?
In Liv's own words, "F*ck it. What's the worst that can happen?"
A lot, apparently.
#SMASHIT
Places to Purchase:
Indiebound
Barnes & Noble
Amazon
Barry Squires, Full Tilt by Heather Smith 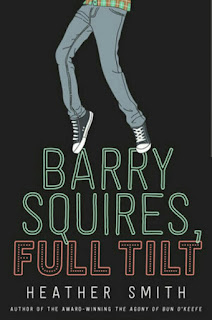 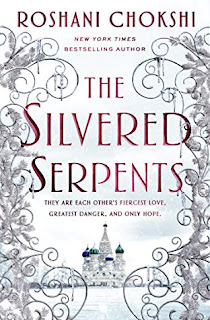 Returning to the dark and glamorous 19th century world of her New York Times instant bestseller, The Gilded Wolves, Roshani Chokshi dazzles us with another riveting tale as full of mystery and danger as ever in The Silvered Serpents.
They are each other’s fiercest love, greatest danger, and only hope.
Séverin and his team members might have successfully thwarted the Fallen House, but victory came at a terrible cost — one that still haunts all of them. Desperate to make amends, Séverin pursues a dangerous lead to find a long lost artifact rumored to grant its possessor the power of God.
Their hunt lures them far from Paris, and into the icy heart of Russia where crystalline ice animals stalk forgotten mansions, broken goddesses carry deadly secrets, and a string of unsolved murders makes the crew question whether an ancient myth is a myth after all.
As hidden secrets come to the light and the ghosts of the past catch up to them, the crew will discover new dimensions of themselves. But what they find out may lead them down paths they never imagined.
A tale of love and betrayal as the crew risks their lives for one last job.
Places to Purchase:
Indiebound
Barnes & Noble
Amazon
A Curse of Gold by Annie Sullivan 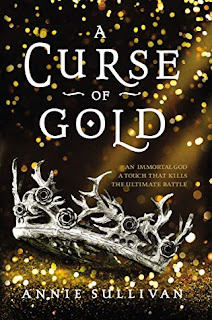 After barely surviving thieving, bloodthirsty pirates and a harrowing quest at sea to retrieve her stolen treasure, Kora finds readjusting to palace life just as deadly. Kora’s people openly turn against her, threatening her overthrow as heir to the throne—a cursed queen who has angered Dionysus. When Dionysus puts out a challenge to kill the girl with the golden touch and burn down her kingdom, it’s not just her future on the throne in danger. Kora’s life and entire kingdom are now on contract.
As bold and brave as ever, Kora sets out to find Dionysus, the very person who is trying to kill her, on the mysterious disappearing island of Jipper. Kora has no other choice. If she wants to save her kingdom and have any chance at reversing her father’s curse, she will have to enter into a deadly game with Dionysus, the greatest trickster the world, or the underworld, has ever seen.
Curses and queens. Pirates and kings. Gods and magic. This highly anticipated sequel to Annie Sullivan’s enchanting A Touch of Gold, the story of the daughter King Midas turned to gold, is the gripping crescendo to this sweeping fantasy adventure. The final saga of a cursed queen, a vengeful Greek god, and a dazzling kingdom in the balance.
Places to Purchase:
Indiebound
Barnes & Noble
Amazon
Every Body Looking by Candice Iloh 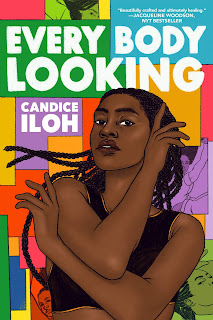 Every Body Looking is a debut novel in verse in the style of Elizabeth Acevedo and Jason Reynolds. Candice Iloh's book tells the story of Ada--daughter of an immigrant father and an African American mother--and her struggle to find a place for herself in America and in her own family.
"This is a story about the sometimes toxic and heavy expectations set on the backs of first generation children, the pressures woven into the family dynamic, culturally and socially. About childhood secrets with sharp teeth. And ultimately, about a liberation that taunts every young person."--New York Times bestselling author Jason Reynolds
Every Body Looking is a heavily autobiographical novel of a young woman's struggle to carve a place for herself--for her black female body--in a world of deeply conflicting messages.
Told entirely in verse, Ada's story encompasses her earliest memories as a child, including her abuse at the hands of a young cousin, her mother's rejection and descent into addiction, and her father's attempts to create a home for his American daughter more like the one he knew in Nigeria.
The present-tense of the book is Ada's first year at Howard University in Washington D.C., where she must finally confront the fundamental conflict between who her family says she should be and what her body tells her she must be.
Places to Purchase:
Indiebound
Barnes & Noble
Amazon
So many great books, so little time! I'm especially excited for Vampires Never Get Old, which has short stories by so many amazing authors! What books are you excited to read this week?
Posted by Isabel C at 9/21/2020 12:00:00 AM