Sometimes what I write for this intro comes easily, other times (like today) it's like I'm struggling against my brain to find any words. I think I'll just let the featured books speak for themselves!
The Secret Recipe for Moving On by Karen Bischer 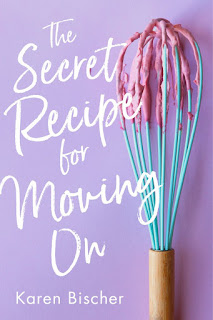 When Ellie is dumped by her boyfriend, she's forced to make new friends (while watching her ex swoon over his new girlfriend) in The Secret Recipe for Moving On, a smart and funny YA debut from Karen Bischer.
Ellie Agresti's not sure anything could be worse than being dumped by her boyfriend, Hunter, the first day of senior year.
But sharing a "life skills" class with him and his new girlfriend, Brynn? AND getting partnered with a "family" of misfits (A.J., the loudmouth; Isaiah, the horse-racing obsessive; and Luke, the tattooed stunt-biker)?
It's a recipe for certain disaster...until an in-class competition allows Ellie to channel her angst into beating Hunter and Brynn's team, and she unexpectedly bonds with her own group–especially Luke–in the process.
But as Ellie soon discovers, it will take more than classroom triumphs to heal her broken heart–and find herself again.
Places to Purchase:
Indiebound
Barnes & Noble
Amazon
Lost in the Never Woods by Aiden Thomas 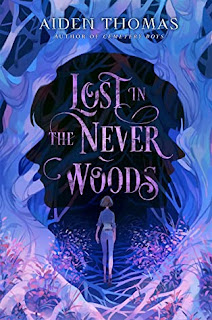 When children go missing in the small coastal town of Astoria, people look to Wendy for answers.
It's been five years since Wendy and her two brothers went missing in the woods, but when the town’s children start to disappear, the questions surrounding her brothers’ mysterious circumstances are brought back into light. Attempting to flee her past, Wendy almost runs over an unconscious boy lying in the middle of the road, and gets pulled into the mystery haunting the town.
Peter, a boy she thought lived only in her stories, claims that if they don't do something, the missing children will meet the same fate as her brothers. In order to find them and rescue the missing kids, Wendy must confront what's waiting for her in the woods.
Places to Purchase:
Indiebound
Barnes & Noble
Amazon
You Heart My Sky by Margarita Engle 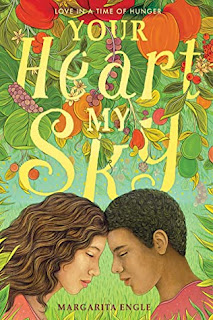 Acclaimed author Margarita Engle tells a painful, poignant story of love in a time of hunger inspired by her own family’s struggles during a dark period in Cuba’s history.
The people of Cuba are living in el periodo especial en tiempos de paz—the special period in times of peace. That’s what the government insists that this era must be called, but the reality behind these words is starvation.
Liana is struggling to find enough to eat. Yet hunger has also made her brave: she finds the courage to skip a summer of so-called volunteer farm labor, even though she risks government retribution. Nearby, a quiet, handsome boy named Amado also refuses to comply, so he wanders alone, trying to discover rare sources of food.
A chance encounter with an enigmatic dog brings Liana and Amado together. United in hope and hunger, they soon discover that their feelings for each other run deep. Love can feed their souls and hearts—but is it enough to withstand el periodo especial?
Places to Purchase:
Indiebound
Barnes & Noble
Amazon
Bruised by Tanya Boteju 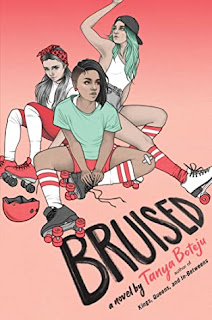 Whip It meets We Are Okay in this vibrant coming-of-age story, about a teen girl navigates first love, identity, and grief when she immerses herself in the colorful, brutal, beautiful world of roller derby—from the acclaimed author of Kings, Queens, and In-Betweens.
To Daya Wijesinghe, a bruise is a mixture of comfort and control. Since her parents died in an accident she survived, bruises have become a way to keep her pain on the surface of her skin so she doesn’t need to deal with the ache deep in her heart.
So when chance and circumstances bring her to a roller derby bout, Daya is hooked. Yes, the rules are confusing and the sport seems to require the kind of teamwork and human interaction Daya generally avoids. But the opportunities to bruise are countless, and Daya realizes that if she’s going to keep her emotional pain at bay, she’ll need all the opportunities she can get.
The deeper Daya immerses herself into the world of roller derby, though, the more she realizes it’s not the simple physical pain-fest she was hoping for. Her rough-and-tumble teammates and their fans push her limits in ways she never imagined, bringing Daya to big truths about love, loss, strength, and healing.
Places to Purchase:
Indiebound
Barnes & Noble
Amazon
Renegade Flight by Andrea Tang 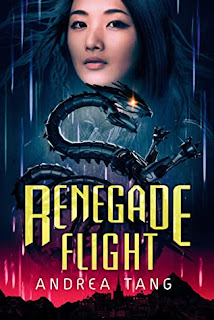 Aurora Rising meets Top Gun, with the addition of cybernetic dragons, in this is the witty, romantic, and electrifying sci-fi novel by Andrea Tang.
Viola Park's life is over. She's gone from planning her future as a pilot-in-training to resigning herself to life on the ground. And it's all because she made one tiny, not-altogether-legal maneuver on the prestigious GAN Academy's entrance exam. It's bad enough that she didn't get into the Academy, but getting caught cheating? It's probably the worst thing Vi could imagine.
Still, there are perks that come with Vi's family legacy at the school, and when Vi learns that recent pilot disappearances have left the Academy desperate for recruits, she does what any good Park would do--uses her connections to wiggle her way back in. But instead of matriculating with the regular class of future Peacekeepers, Vi is forced to enter as a probationary student, which means she'll have to work twice as hard to prove herself worthy of a place in the cockpit of one of the legendary dragon mechs.
Lucky for Vi, the Academy has set up a combat tournament for all students, and the prize is a guaranteed spot in the Peacekeeper corps. Unlucky for Vi, she'll have to compete against her probie classmates, including Nicholas Lee, a mysterious boy prone to throwing Vi off her game. And as more Peacekeepers go missing, what starts out as a ploy to save her reputation turns into a fight for the future of Peacekeepers everywhere, and if Vi can't master her mech combat skills, she might not survive the battle.
Set fifteen years after Prudence Wu took flight in Rebelwing, a new generation of scrappy young pilots challenge corruption, competition, and more dangerous mechs than ever, as they redefine what it means to be a revolutionary.
Places to Purchase:
Indiebound
Barnes & Noble
Amazon
Flamefall by Rosaria Munda 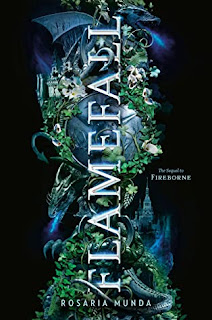 Revolutionary flames ignite around Annie, Lee, and a brand new POV character in the second book of the Fireborne trilogy.
After fleeing the revolution and settling into the craggy cliffs of New Pythos, the Dragonlords are eager to punish their usurpers--and reclaim their city. Their first order of business was destroying the Callipolan food supply. Now they're coming for the Dragonriders.
Annie is Callipolis's new Firstrider, and while her goal has always been to protect the people, being the government's enforcer has turned her into public enemy number one.
Lee struggles to find his place after killing kin to prove himself to a leader who betrayed him. He can support Annie and the other Guardians . . . or join the radicals who look to topple the new regime.
Griff, a lowborn dragonrider who serves New Pythos, knows he has no future. And now that Julia, the Firstrider who had protected him, is dead, he is called on to sacrifice everything for the lords that oppress his people--or to forge a new path with the Callipolan Firstrider seeking his help.
With famine tearing Callipolis apart and the Pythians determined to take back what they lost, it will be up to Annie, Lee, and Griff to decide what to fight for--and who to love.
Places to Purchase:
Indiebound
Barnes & Noble
Amazon
The Follower by Kate Doughty 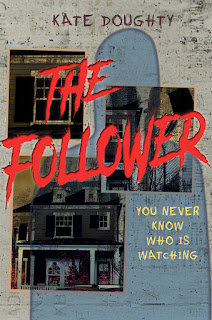 A spine-tingling YA thriller, based on a still-unfolding true story
Instagram-famous triplets Cecily, Amber, and Rudy—the children of home renovation superstars—are ready for a perfect summer. They’ve just moved into the site of their parents’ latest renovation project when they begin to receive chilling messages from someone called The Follower. It soon becomes clear that this anonymous threat is more than a simple Internet troll, and he can’t wait to shatter the Cole family’s perfect veneer and take back what’s his.
The Follower examines the implications of what it is to be watched in the era of social media fame—as well as the lies we tell and the lengths we’ll go to uphold a perfect image, when our lives depend on it.
Places to Purchase:
Indiebound
Barnes & Noble
Amazon
Girls With Rebel Souls by Suzanne Young 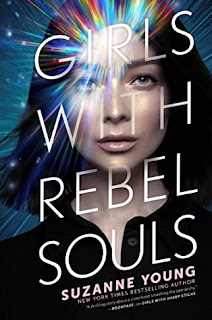 The girls make their final stand in this third and final novel in the thrilling, subversive near-future series from New York Times bestselling author Suzanne Young about a girls-only private school that is far more than it appears to be.
Never underestimate a girl with a rebel soul…
The girls of Innovations Academy escaped the confines of their unethical school, fought against the system protecting predators who targeted girls for harassment, and they’re not done yet. They’re still not free.
Reeling from one revelation after the next, Mena and her friends begin to unwind the truth of their existence and, as a result, their destiny. The men from Innovations Corporation still hunt them, the woman who created them still wants control over them, and worst of all, Mena realizes that through all her pain, all her tears, the world of men has not changed. There is no more time to hope for the best. The girls know they are in a battle for their lives, a war for their very existence.
The girls of Innovations Academy have sharpened their sticks to fight back, they have fought for justice with blood from their razor hearts. And now, the girls will choose their true nature...and how they define their rebel souls.
Places to Purchase:
Indiebound
Barnes & Noble
Amazon
The Theft of Sunlight by Intisar Khanani 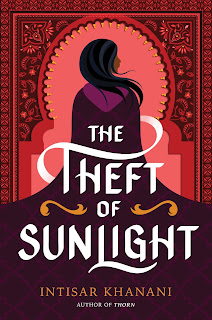 I did not choose this fate. But I will not walk away from it.
Children have been disappearing from across Menaiya for longer than Amraeya ni Ansarim can remember. When her friend’s sister is snatched, Rae knows she can’t look away any longer - even if that means seeking answers from the royal court, where her country upbringing and clubfoot will only invite ridicule.
Yet the court holds its share of surprises. There she discovers an ally in the foreign princess, who recruits her as an attendant. Armed with the princess’s support, Rae seeks answers in the dark city streets, finding unexpected help in a rough-around-the-edges street thief with secrets of his own. But treachery runs deep, and the more Rae uncovers, the more she endangers the kingdom itself.
Places to Purchase:
Indiebound
Barnes & Noble
Amazon
As always, there are lots of great books to choose from this week! I've got Girls With Rebel Souls on preorder, and I'm keeping my eye on a bunch of these! Which books are you planning to pick up this week?
Posted by Isabel C at 3/22/2021 12:00:00 AM