I am so excited to be a part of this blog tour! I loved The Iron Fey series growing up, and when I learned about this new spin-off, I knew I needed to read it! The Iron Sword is the second book in the series, following Puck's book from last year. It released just this Tuesday, so you can go to a store and get it now! 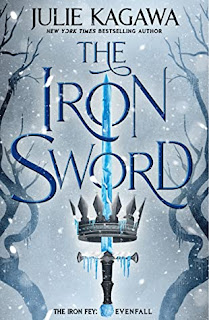 Born in Sacramento, CA, Julie Kagawa moved to Hawaii at the age of nine. There she learned many things; how to bodyboard, that teachers scream when you put centipedes in their desks, and that writing stories in math class is a great way to kill time. Her teachers were glad to see her graduate.
Julie now lives is Louisville, KY with her husband and furkids. She is the international and NYT bestselling author of The Iron Fey series. Visit her at juliekagawa.com.
You Can Find Her At:
Website
Twitter
Instagram
Facebook
Goodreads
Posted by Isabel C at 2/04/2022 08:27:00 AM