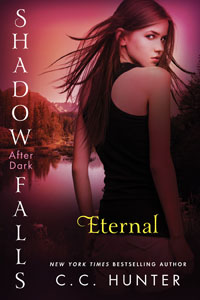 Just when Della feels like she’s starting to figure out her life, she finds herself reborn…and her new existence comes with a whole different rulebook.

Della's secret powers always made her feel like an outsider in the human world. Now, just when she’s starting to feel like she belongs—at Shadow Falls, a camp for teens with paranormal powers—her life is turned upside down all over again. Attacked by a deadly virus, she must make the difficult choice to be reborn. It’s her only chance at survival, but it comes with a price: It irreparably bonds her to Chase, a tall, dark and mesmerizing vampire who makes her laugh one minute and infuriates her the next.

Chase already knows too many of Della’s secrets, and being eternally bonded to him is the last thing she wants. Even worse, she doesn’t fully understand what their bond means. Is the attraction she’s started feeling for Chase real—or does fate have something else in store? And what does that mean for Steve, the hot shapeshifter whose kisses make her weak in the knees?

Now Della’s battered heart is about to take another hit. While investigating her latest case, she discovers shocking evidence about her father’s dark past, making her question everything she believes to be true…and her place in the world she loves.

Second books in a series, especially a trilogy, will often fall into two categories. Either they have Second Book Syndrome, or they are totally, epically, amazing. Thankfully, this one fell into the latter category.

I still love Kylie more. That said, I really like Della. She's a tad more stubborn, but I like that in a character. I really like Chase, but he still keeps too many secrets for my taste. We didn't get to see much of Miranda or Kylie, which I would have liked more of.

I got into this one more so than Reborn. Things really build up in the novel, leading up to some pretty big stuff. I have so many theories going so many different directions, it's hard to keep track of them all. Characters are constantly changing and ships are exploding, sometimes in a good way, sometimes bad.

Writing: 4/5 The writing is somewhere between Jennifer L. Armentrout and Richelle Mead. Easier to read than some novels, but not fully so.
Plot: 5/5 The plot has twisted SO many different directions in this novel. So many questions are left unanswered, and I need to know what happens NOW!
Characters: 4/5 Characters are in the shifting phase, and so I'm never quite sure when something is in or out of character for that person.

This book had me on a roller coaster of emotions. One second, all was calm and then the next, I was on the edge of my seat! Things just kept happening. The author is definitely building up to something major, and I'm excited to see what it is. The one thing this does have on the original series is that the books tie together a bit more and as a result, the stakes are a LOT higher! This book definitely didn't catch the second book syndrome. An overall fun book that I recommend to anyone interested in the paranormal genre, as long as you read all six books that come before it!