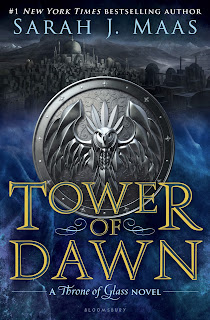 In the next installment of the New York Times bestselling Throne of Glass series, follow Chaol on his sweeping journey to a distant empire.

Chaol Westfall has always defined himself by his unwavering loyalty, his strength, and his position as the Captain of the Guard. But all of that has changed since the glass castle shattered, since his men were slaughtered, since the King of Adarlan spared him from a killing blow, but left his body broken.

His only shot at recovery lies with the legendary healers of the Torre Cesme in Antica—the stronghold of the southern continent's mighty empire. And with war looming over Dorian and Aelin back home, their survival might lie with Chaol and Nesryn convincing its rulers to ally with them.


But what they discover in Antica will change them both—and be more vital to saving Erilea than they could have imagined.

I was not expecting to enjoy this book as much as I did. While I love Sarah J. Maas, I went into Tower of Dawn not liking Chaol much, if at all. But by the end of the book, I liked Chaol much more than when I started. Unlike most of her books, ToD was pretty slow for most of the book, and then everything seemed to happen in the last 50 or so pages.

Holy moly, the characters. Let's start with Yrene. She has become a much more experienced healer since we saw her last in The Assassin and the Healer. Now, Yrene has accomplished amazing feats with her healing magic, and it looks like she might be the next leader of the Torre, the Healer on High. I loved Yrene. She'd be amazing alone for being able to put up with Chaol's crap. Yrene is an amazing human being. She's also friends with some of the members of the royal family, and it's cool to see their interactions.

Chaol whines a lot in this book. To be fair, he did just lose the use of his legs, but instead of handling it decently, he takes out his angst on everyone around him. Basically, he is not a person you would want to hang out with. Yrene manages to help Chaol over time, but he starts out very resistant to her. Luckily, she knows when to push him and when to hang back. Chaol definitely grows as person, and he seems much calmer by the end of the book.

The characters don't stop! Now we're on to Nesryn. In Queen of Shadows, she was mostly a background character. We know that she's an archer and that she an Chaol are sleeping together. That's pretty much it. Right off the bat, Nesryn is a much larger character in Tower of Dawn than in any previous books. One example is she gets a large portion of the POV time. Nesryn starts off the book still in the background, but she shines in part two. And let me just say, Nesryn and Sartaq forever!

The reader doesn't really get to know Sartaq until part two, but boy do we get to know him. I was rather untrusting of him in part one, but I realize in part two that he's actually super awesome. Sartaq is dedicated to his people, both his blood family and his hearth family. I can't wait to learn more about Borte and the rest of Sartaq's hearth family.

Along with our main crew, there are a bunch of other awesome characters in Tower of Dawn. There's Hafiza, the Healer on High in the Torre Cesme. She seems like an awesome lady, and leads to the Torre well. There's Hasar, one of the royal children. She's not the nicest, but she's oftentimes hilarious. Luckily, we'll be getting more Hasar in the future.

Up until now, we knew very little about the Southern Continent, where all of this book takes place. There's lots of description, which can get a bit tedious at times, but really emphasizes the beauty of this empire. I was lucky enough to see Sarah talk in September, and she mentioned that much of the Southern Continent was inspired by Genghis Khan and the Mongols. With that in mind, the world building has cool connections to our own world. I really hope I get to see more of the Southern Continent, or at least the characters we met there.