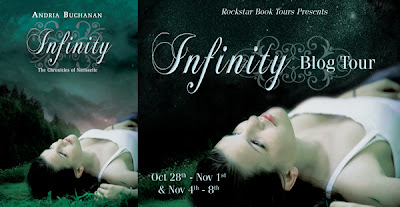 Today, I am happy to be taking part in the blog tour for Infinity by Andrea Buchanan! My post is a review of the first two books (due to the amount of tours I'm in this week-one every day) I could only get the first two read, but the review of book three will be added as soon as humanly possible! And make sure to check out the bottom with an awesome giveaway and links to the rest of the tour!

These books were really good! Due to reading them so last minute, some skimming was done, but I can't wait to go back and reread them in depth! The idea behind the story is definitely original. Generally the characters start in a fantasy world or the real world and don't leave, but these characters start in the real world and get sucked into a fantasy world THROUGH A BOOK! Yes, I said book.

The main character is Allie Monroe. Like the Abnegation say in Divergent, the leader should be someone who does not want to lead. Allie is an unpopular, quiet, high school girl. She doesn't want power and she sure as heck doesn't want to lead a country. Yet when she arrives in the fantasy land, she's immediately give power. My biggest problem with Allie is her self-confidence. It's next-to-none. And while it's realistic to have times when you're down, Allie constantly doubts herself and lets others get in her head. Besides that, I really like her. Allie leads her country with a firm hand and promises the way to a better future. Her romance with Winston was interesting. It's made known from page one that she's had a crush on him for as long as they've been friends, but that he hasn't returned her feelings. The romance comes on very suddenly, and while I like it, it could have felt more
natural.

The plot of the books was interesting and different. It didn't twist and turn as much as some others, but it still left me wanting more. Let's just say, book three won't be waiting very long to be read. I feel like the characters besides the Allie are fairly weak. The author manages to make me feel attached to them, I would cry if her best friend Mercedes or Winston were to die, but the reader simply doesn't know enough about their backstory. The characters are slowly built upon, but it could be more so. The writing is also well done. Nothing is explained too much nor too little. I always understood what was going on, even when coming back from a long period of not reading. The books were fun and interesting, but with a couple faults. I give them a solid four star review!
Author Bio: 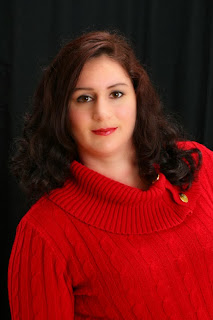 Patricia's a small town girl who was blessed with a large tree in the backyard that was a perfect spot for reading on summer days. Mixed with too much imagination it made her a bratty child but fated her to become a storyteller. After a stint of “thinking practically” in her twenties she earned degrees in Business and Economics and worked for a software firm in southwestern Germany but, her passion has always been a good book. She currently lives in Pittsburgh with her two wonderful kids and a husband that learned the gourmet art of frozen pizzas to give her more time to write. When she's not writing she can be found fencing and arguing with her dogs about plot points. Most days the Beagle wins but the Dalmatian is in close second. She's in a distant third. Patricia writes adult Paranormal under the name Patricia Eimer and writes Young Adult books under the name Andria Buchanan.

Although she’s still stuck in the magical world of Nerissette, Queen Allie is finally ready to build a relationship with the half hottie, half dragon next door, Winston. But all isn’t really fair in love and war. Unrest is quickly forming at the borders and soon Allie realizes that the Fate Maker wasn’t the only one who wanted her crown.

When her trusted aunt Bavasama sends her troops into Nerissette on a campaign of murder and mass destruction, Allie has a tough decision to make. She can’t take the chance of letting more people die or letting those she’s lost disappear from memory, but there is more at stake than even she knows. Still, Allie has to do something. And in the process she’ll discover what she’s truly made of when faced with a series of options…each more horrible than the last.

You Can Find it At:
Amazon
Barnes& Noble
Goodreads

$50 Amazon or Barnes & Noble Gift Card US Only